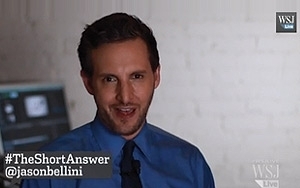 Why wait to advertise with The Wall Street Journal, when you can do so right now?

That was basically the publisher’s pitch to media buyers during its NewFront presentation, on Friday. The event’s official “Right Now” theme was also intended to highlight WSJ’s mastery of “real-time marketing solutions,” according to Trevor Fellows, head of global advertising sales at The Wall Street Journal.

Among other new projects, Fellows and company were most eager to show off “Signal,” a new digital video magazine that will feature a mix of reports from WSJ staff and partner filmmakers.

“Future of Everything” is a new series that will endeavor to look beyond current news cycles and trends in order to give viewers a look into the future of, well, everything.

The WSJ is also bringing back “The Short Answer” a series that specializes in breaking down complex topics from tax audits to the disappearance of Malaysian Airlines flight 370.

News Corp. CEO Robert Thomson on Friday said Storyful would help The Wall Street Journal create global communities. Along with its native ad efforts, Storyful would be brought in to complement News Corp.’s existing video capabilities, which already include the creation and distribution of original and on-demand programming, such as WSJ Live and BallBall in Asia.

And yet the newspaper is experimenting with its own interpretation of the genre, having just completed a 20-week first-season run of its Startup of the Year online show -- a contest that it calls an “interactive crash-course in entrepreneurship.”

Also, as part of a multiyear ad pact with Adobe, the publisher recently created a new digital section, CMO Today, which caters to the same marketing professionals that the software giant hopes to call clients.