Ad viewability may be one of the most important issues for digital marketers today, but progress has been slow. Just over half (51.3%) of ads were viewable on ad exchanges in Q1 2014, a marginal increase over the 47.4% rate from Q4 2013.

That’s according to Integral Ad Science, which on Monday released a quarterly media report for Q1 2014.  Integral says the data in the report comes from ads bought on “nearly all” major ad exchanges through five major demand-side platforms (DSPs).

Despite minimal quarter-over-quarter improvement on the viewability front, Integral expects the rate to rise in its next quarterly media report, citing the Media Rating Council's recent lift of its viewability advisory. 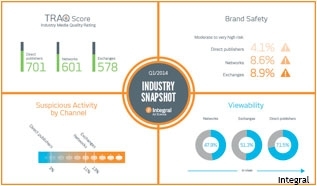 But viewability is not the only measuring stick Integral uses to determine media quality. The company also looks at brand safety and ad fraud, as well as its own "true advertising quality” score, which Integral scores through a mix of fraud, viewability, ad clutter, brand safety and professionalism ratings.

Exchanges continued to keep “suspicious activity” at bay in Q1, but made no progress over Q4. Integral deemed 13% of inventory traded on exchanges in Q1 “suspicious,” the same amount as Q4. While not an improvement, it’s good the industry did not regress in this category -- 30% of inventory was “suspicious” in Q3 2013.

Integral has also announced that advertisers can now target media based on its TRAQ score through AppNexus, Google DoubleClick Bid Manager and Turn.