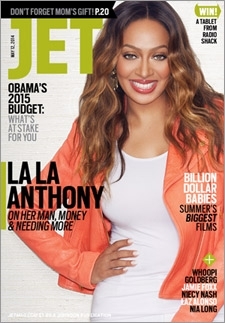 Jet -- the iconic magazine that has served African-American audiences with news, opinion, and lifestyle content for 63 years -- is shuttering its print edition and going digital-only, according to owner Johnson Publishing. The print edition will cease publishing effective in June, when the publication will transition to a weekly digital magazine app as its primary distribution channel. Jet's current print subscribers -- numbering around 720,000 -- will receive Ebony, another Johnson title, going forward.

In addition to breaking news updates, the new digital Jet will emphasize interactive and multimedia content including video interviews, enhanced digital maps, 3D charts and photography from the Johnson Publishing archives, all optimized for tablets and smartphones. In terms of editorial focus, the magazine will continue its coverage of politics, pop culture and social issues, while increasing its entertainment news offerings.

The digital shift marks a return to a weekly publication schedule for Jet, which began as a weekly but moved to a reduced schedule of an issue every three weeks in recent years. Johnson also plans to revamp the Jet Web site, and is working on an associated e-commerce platform as well, according to Adweek. There will still be some print presence, as the magazine will also publish an annual special print edition.

Like many other print publications, Jet has had a rough decade, as advertisers followed consumers migrating to digital media. Jet's total ad pages tumbled from 1,171 in 2006 to just 271 in 2013, for a 77% drop over seven years, and the decline continued in the first quarter of 2014, with a 25.6% drop to 45 ad pages.

The decision to close Jet’s print edition comes just a few weeks after Meredith Corp. decided to close the monthly print version of Ladies' Home Journal, the iconic homemaking title, and transition it to a newsstand-only quarterly publication.