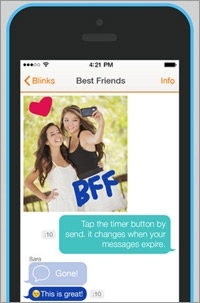 Yahoo has dipped into the disposable messaging space in acquiring the app Blink. Like the more popular app SnapChat, Blink from Meh Labs offered iOS and Android users audio, drawn, video and image messaging that self-destructed shortly after sending them. The company founders announced the acquisition on their site. “We built Blink because we believe everyone should be free to show the same honesty and spontaneity in their online conversations as they can in person,” the founders wrote. “We look forward to the possibilities that will come from bringing the Blink vision to Yahoo.”

Exactly how that disposable messaging vision will be brought to Yahoo is immediately unclear, however. The site also announced it would be discontinuing the app in the next few weeks. The seven-member Meh Labs team will be joining Yahoo, TechCrunch reports.

Blink allowed users to exchange images and drawings and set a timer for when the message would be erased. Blink was a very small player in a messaging space dominated by the likes of Snapchat and chat apps with hundreds of millions of users. When it appears on the Android operating system months ago Blink claimed over 100,000 users.

According to reports, Yahoo has made over 40 acquisitions in the last two years and since CEO Marissa Mayer took over.

Disposable messaging apps have come under scrutiny of late. The FTC claimed that SnapChat had misled users about the ability of people to save messages the maker thought were destroyed.