REI Blows Up A Sleeping Bag For New Campaign 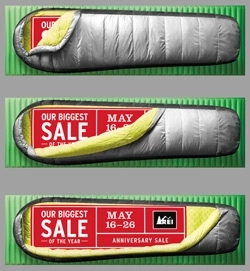 Outdoor sports retailer REI wanted attention for its biggest sale of the year, its annual anniversary sale, happening May 16-26. So it is erecting what it claims is the "first transitional, inflatable billboard with multiple reveals used to communicate sale information."

"We wanted to do something beyond just typical, traditional [out-of-home]," says Kathy Dillion, senior vice president-group director, Spark. "We wanted something that would stand out, inspire conversation and showcase REI as a brand, while at the same time clearly communicating the anniversary key sale messaging."

The “billboard,” created by REI, Spark and production partner MMT is actually a huge (46' 4") inflatable, iconic REI sleeping bag on a billboard in Philadelphia. The bag debuted Monday with viewers seeing the sleeping bag nearly closed, illustrating that the sale is coming.

Then, on Thursday, more of the bag was "unzipped" to reveal more of the sale message. On the 19th, the complete bag and message will finally be revealed.

The REI inflatable sleeping bag promotion is supported with additional out-of-home in the Philadelphia market, as well as digital, audio and newspaper media.

One key challenge was the sleeping bag itself.

"A very critical player was our production partner MMT," says Dillion. "They were instrumental in helping us find a way to make our sleeping bag look realistic, just like one that REI would sell in store and online. We had several ideation work sessions where all of these teams sat around a table (with a speaker phone in the middle!) and brainstormed on ways to bring this to life."

This is the first time REI has used out-of-home media this way, but has plans for similar projects, says Dillion."We see customized, local activation as core to their business and intriguing OOH is a great way to spur interest and dialogue in the market."
ad campaign, advertising, out-of-home
Next story loading