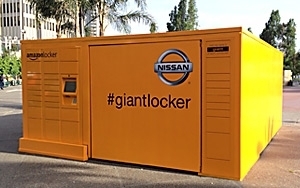 Last year, someone got a Nissan Versa Note in a box; a huge box; an Amazon box. It was an extension into three dimensions of a marketing program in 2D that put the car on Amazon.com as a purchasable product. Video of the guy taking delivery was a buzz-driven success with people sharing the content around the world, generally wondering what the hell was in the box.

Nissan's back with Amazon, or it's back in Amazon, and again, what's in the box? Technically, it's not a box. And the vehicle this time is the newest version of the Rogue compact crossover. And the program, via Nissan's AOR TBWA\Chiat\Day, doesn't include a digital "For Sale" sign on Amazon this time.

The crossover, as of this writing, is sitting in a giant red locker, an outsized version of Amazon's new delivery-locker system for consumers with no secure package delivery. The locker is in a park in San Francisco, down by the ferry terminal. It is branded both Amazon and -- as of this morning -- Nissan.

The box, which is lined with other lockers, big and smaller (although all are way smaller than the biggest) is locked, with each locker accessible by code. Thus the social tie-in: the boxes contain prizes, the biggest being the Rogue itself. To get a shot at winning, one has to tweet, Instagram or otherwise comment to #GiantLocker for a code which may or may not open a lock. Among other prizewinners, one will have won the car by Friday afternoon when the stunt officially ends.

Since the locker went up Thursday it has generated a lot of buzz, per Erich Marx, head of interactive and digital media at the Franklin, Tenn.-based Nissan North America. "Since noon yesterday when we put it there, Twitter has exploded," says Marx. "People are asking 'What's in the locker?'" He says the project has gotten earned media hits from local news. The project is also on facebook.com/NissanRogue, and can be found by searching the hashtag #GiantLocker on Twitter and Instagram.

Marx says last year's program went so well as a buzz-builder, the two partners wanted to do it again -- and were initially thinking about figuring out a way to deliver the Rogue by drone, which would pretty much require a cargo helicopter. "Ultimately, Amazon came to us with the locker idea, and we gave it to Chiat and they came up with the full pitch."

And he says Nissan and Amazon are thinking about executing on other possibilities because of the amount of awareness the programs have generated, including in other global markets. "These experiential stunts really catch fire in the social space; our global team is wondering if it's transferrable across oceans."

"The power of this kind of program is in bringing two brands together. In this case, one plus one is three," says Marx. Nissan launched the second-generation 2014 Rogue in January during the Rose Bowl and BCS Championships. The vehicle has sold strongly since then, gaining 49% year-to-date April per the company and about 27% in April, versus the month last year.