The Birdman Flies For Mini 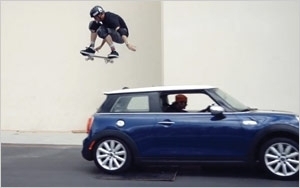 BMW Group's Mini unit gets video. On the heels of the brand's Final Test Test Drive series, the automaker now has skateboarder extraordinaire Tony Hawk jumping over a Mini hardtop that is coming at him at 30 miles per hour. The video was actually shot last fall right after Hawk bought one of the cars. It's also the first salvo in a partnership with Hawk and his brand.

The deal makes the auto brand the official vehicle of Tony Hawk’s Birdhouse Skateboards Summer Tour (named for Hawk’s handle, “Birdman”), a multi-city road show in which Hawk and company will ride a fleet of customized Mini Countryman vehicles to Mini events around the country. Hawk, meanwhile, will design a co-branded, limited-edition board, some of which will be auctioned for charity, while others will be given away as prizes at events.

Mini will also support the Tony Hawk Foundation, backing the "Stand Up for Skateparks" event at the 11th-annual Action Sports Carnival in Beverly Hills in September. The event will showcase top skateboarding and BMX talent. Mini will also be donating to an auctions series to benefit the Hawk's foundation.

"It's a natural fit between our communities and our thinking," says Mini U.S. director of marketing Tom Salkowsky. "He's an entrepreneur and he's independent; he goes his own way." He tells Marketing Daily that the activities with Hawk are part of a larger "board strategy" that includes partnerships with Burton and its surfboard unit Channel Island.

"It reaches a certain mindset of consumers, and it's not about the NFL or MLB." Salkowsky says Mini will continue to do programs with Hawk over the the course of 2014, at least. As for the car jump, "it's actually a stunt he always wanted to do but had never really had the chance."