The legitimacy of a marriage between native and programmatic has been a well-debated topic, but that hasn’t stopped a number of companies from banking on its consummation and launching native ad exchanges.

NativeX is the latest to give it a shot, as the company on Wednesday announced the launch of a global native exchange for mobile advertising.

There have been a slew of native ad exchanges launched in recent months, including another mobile-focused exchange from OpenX. However, NativeX pitches their exchange as unique because of its focus on mobile games, specifically free-to-play games.

“What’s really different about this is that we focus on the games segment,” Ryan Weber, co-founder and SVP of product, said to RTM Daily. “It’s a very large segment for inventory. The amount of time spent in games right now is larger than any other app category.”

Weber said the new exchange will support real-time bidding (RTB), though it doesn’t follow the Interactive Advertising Bureau’s OpenRTB standards. He said this is because “most of the demand partners [NativeX] works with are bidding” on a cost-per-install basis.

However, Weber noted that publishers can customize their own formats and placements, so the real number of different ad units available through the exchange is “infinite,” depending on how much each publisher customizes. 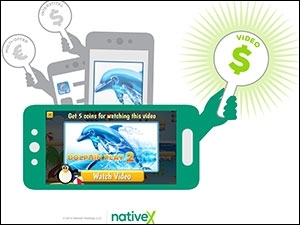 “The publishers decide which advertisers and which creative assets they allow to compete for different placements,” Weber explained.

Weber acknowledged that in a way, each publisher gets to set up their own private marketplace through the NativeX exchange. In addition to the controls spelled out above, Weber said the publishers will also work with NativeX to manage pricing thresholds. In other words, publishers can determine the minimum amount advertisers must pay in order to advertise on their apps.

The ads can be both reward and non-reward focused, meaning publishers and advertisers can offer the consumer something of value (as it relates to the mobile game they are playing) for interacting with an ad. That adds to the "native" aspect of the exchange.

“Freemium games are the dominant model right now, and they usually offer a virtual currency,” explained Weber. “So the developer will work with advertising to reward users for watching a video or completing an offer.”