My Toon And Me: Real-Time Messaging Avatars Let You Play With Your 'Self' 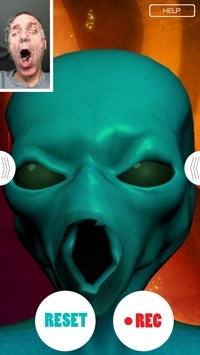 Sometimes cool technologies are just cool on the face of it and for their own sake. Other times the coolness actually has some depth. The technology tugs at something more meaningful about ourselves, perhaps our times, or even just our relationship to gadgetry itself. The real-time motion tracking cartoon maker Nito falls into that second category.

The app uses some remarkable technology to take those early talking tomcat apps from a few years ago to the next level. The motion-tracking tech captures your basic facial characteristics and without further markers renders your voice, facial and head gestures in real-time into a 15-second video clip for sharing. You see yourself transformed into one of several cartoon figures. The effect is not quite in that uncanny valley of too-near human cartooning, but there is as much of a psychological as a technological trick going on here. You are watching a strange kind of mirror of yourself. There are enough matches to your head, eye and mouth movements to feel the connection between yourself and the avatar. The real-time rendering helps immeasurably in making that psychic link between yourself and the toon.

Nito is offering this up to consumers as a cute way to make short video for redistribution over the social nets. And they suggest it is a kind of communication. I would love to see this tech actually grafted onto a live messaging app. You and a friend could video chat as cartoon versions of yourself and still retain the basic gestures and expression to give accuracy to the visual exchanges. But Nito has in mind the larger utility of this to the animation and production industries. It is evolving a markerless motion capture system and on-the-fly rendering (on a phone, no less) that clearly has application in the commercial space. They tell me that a Pro version is available for developers, brands and agencies that includes a desktop version with unlimited HD video creation length.

But as an exercise in avatar building, Nito adds an interesting wrinkle to the perennial issues that digital avatars raise about our modern presentation of self. Role-playing games and alternate universes like Second Life and even The Sims have always tweaked questions of authenticity, alternative selves, etc. in our virtual lives online. In large part we know that the social networks are really networks of avatars -- idealized versions of ourselves as much as unmediated self-expression. We know that people share many news stories from impressive media brands partly to impress others with what they read.

By the way, before the hell-in-a-handbasket crowd sees more signs of cultural decline here, the “presentation of self” in social life is a theme that sociologists, social psychologists and historians have explored for decades. The late Victorian middle-class social world was grounded in theatricality and staging. The Internet didn’t invent invented selves.

If anything, the virtual technologies and avatar-building digital media allows us to emphasize the made-upness of online selves. A technology like Nito’s connects our physical self to our avatars more closely for nuanced communication. But at the same time the cartoonish rendering is even more not-me than most avatars.

The new modes of person-to-person and one-to-many communication mobility and mobile technology allow us to tug at important questions about how and why we communicate. Even marketers need to appreciate the real intimacy of these technologies. It is not just that they are close to our bodies or are used for connecting with friends and families. These devices are also teasing out in us and our culture deeper questions of what connectivity means for us. By allowing us to connect everywhere at any time and in new formats that emphasize different voices or selves, the devices make us reflect on why we want and need to.