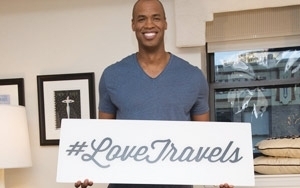 Marriott International is coming out with its largest-ever diversity campaign for the LGBT demographic.

The social, print, out-of-home and digital effort --  themed #LoveTravels -- focuses on self-identity, pride, love of travel, sense of home and comfort, and Marriott properties as the place to experience all of it.

The effort involves a partnership with photographer Braden Summers, and features his portraits both of well-known gay and transgender Americans and regular real-life couples.

In the former category are Jason Collins, professional basketball player who came out last year, thus becoming the first out pro athlete in one of the four major sports; Geena Rocero, a transgender Filipina fashion model and social advocate who made waves revealing her birth gender and speaking out at events like TED; and Talisha Padgett-Matthews, a Marriott associate. The photos also feature several premiere Marriott hotel properties in New York and Miami.

"We wanted to make a bold statement," says Kristine Friend, senior director, segment marketing at Marriott International. "We are tripling the investment. In the past, for example, we hadn't done any mobile or tablet advertising, and we also hadn't had this degree of print or display advertising. And we're doing a ton of out-of-home."

"We are increasing our commitment to reflect what the world looks like,” she says. “We wanted to do something different to illustrate a wider sense of belonging."

The company is making the photos a featured visual on building wraps, enshrouding five Washington DC hotel properties, and is sponsoring several Gay Pride events in the city, as well as in San Francisco and New York. Unveiled Monday, the wraps are on the Renaissance and Residence Inn hotels at Dupont Circle; the Renaissance Washington Downtown; the Ritz Carlton; and the Washington JW Marriott.

Summers photos are also featured in multi-market display ads and an online portrait gallery, accompanied by each subject's personal stories and behind-the-scenes video taking during the photo shoots, and featuring the couples talking about their lives, travel and love.

The national effort also involves print ads in the LGBT vertical, per Friend, who says the ads are running in publications like Passport and The Advocate. Elements of #LoveTravels campaign are also on the Marriott LGBT Web site Marriott.com/gaytravel.

Marriott International sponsors and is event host of organizations including the Human Rights Campaign, PFLAG, the National Center for Lesbian Rights, and Out & Equal Workplace Advocates.