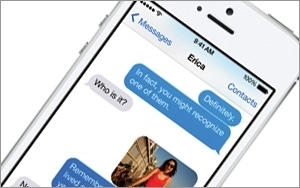 Amid the slew of new features and updates that Apple unveiled Monday at its Worldwide Developer Conference, one that came in for an extensive overhaul was its Messages app. Apple effectively took steps to bring its own messaging tool up to speed with the leading brands in the Age of Messaging like WhatsApp, Line and SnapChat.

That means in large part shifting from traditional text messaging to embracing the group chat style and multimedia that has emerged in the newer wave of messaging apps. To that end, for example, iOS 8 users will be able to browse photos and videos sent to a conversation in a separate pane, and share their location in Messages.

A Tap to Talk feature allows voice messages to be sent as audio. Crucially, Apple has also improved the ability to manage group chats. Users can add and remove people from a conversation on the fly, abandon a session they have grown tired of, or simply turn on a “Do Not Disturb” feature.

During the demo, Apple also showed that message attachments would “self-destruct” unless a user opts to keep them. That space-saving wrinkle naturally brings to mind apps like SnapChat, predicated on messages disappearing after a short time. Some of the similarities with other apps did not go unnoticed.

Suggestions have popped up online that the revamped Message app represents a threat to WhatsApp, acquired by Facebook earlier this for $19 billion and boasting 500 million users. But as noted by Ars Technica, it appears the Apple messaging service will hand iMessage-only communications. That puts it at disadvantage to WhatsApp, Line Facebook Messenger and other messaging apps that run across different mobile platforms.

As an iOS-dedicated app, Message, and the iMessage system, only work on Apple products. That means it won’t be able to win the numbers game against the most popular messaging apps. But it’s consistent with Apple’s broader strategy of trying to keep users within its own ecosystem, and cheaper than forking over nearly $20 billion for a competing app.

Apple may be taking messaging more seriously now, but it’s still a small piece of its consumer tech empire. With the upgrade, it aims to be more competitive with the top free messaging apps without necessarily trying to crush them as direct rivals.