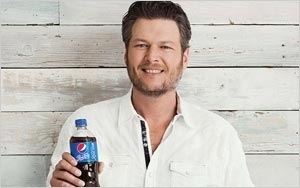 Country superstar Blake Shelton will perform for the first time during the CMT Music Awards — although the live performance will be broadcast remote, from a Pepsi-branded stage set up outside of the award show's venue, Nashville's Bridgestone Arena.

The appearance on the June 4 awards show, dubbed "CMT's Real Big Pepsi Block Party," is part of Pepsi's new brand ambassador deal with Shelton (who is a nominee for a 2014 CMT award).

Pepsi is sponsoring Shelton's summer tour, during which he will be promoting the new "Pepsi Made with Real Sugar" product. Shelton will also appear on retail point-of-sale displays across the country.

During tour stops, Pepsi will be providing samples, including two limited-time "with real sugar" flavors (vanilla and wild cherry). At some concerts, Pepsi will offer to "customize your own mini can" stations.

Leading up to Shelton's CMT Music Awards performance, Pepsi surprised 24 fans around Nashville, awarding them a VIP experience at the remote performance. Clips of the fans' reactions will be incorporated in a Pepsi ad to air during the awards show.

In addition, Pepsi and CMT held a contest in which Shelton fans submitted their best original Shelton lyrics. The winner is being flown to Nashville to see Shelton perform during the CMT awards show, with premiere access to the red carpet, tickets to the country music celebration and a $1,000 shopping spree.

Immediately following his live performance, CMT and Pepsi will release a second exclusive Blake Shelton performance from the Pepsi stage at the awards show, and will invite fans to tweet #BlakeNow to receive the content online.

During last year's CMA Music Festival, Shelton made a surprise appearance in front of the Pepsi Music Bus in the Music City Center, and joined fans in Pepsi contests and activities. Pepsi also hired Shelton to perform at PepsiCo's PepCity dome in New York City's Bryant Park as part of this year's Super Bowl festivities.

Shelton told Fortune that he had been hoping these earlier gigs with Pepsi would lead to a full-blown brand ambassador deal. "In the negotiations, I was just like, ‘Please, will ya’ll work with me?’” he said. "[Pepsi] has such a history with working with some of the biggest, most successful, greatest artists of all genres of music. It feels like a great accomplishment for me personally.” He added: "I'm blown away by some of the ideas [Pepsi’s] already had for some of my tour this year."