Brands Man Up For Father's Day 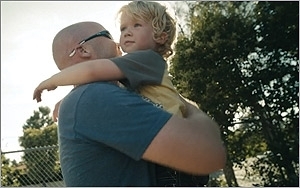 Father's Day was invented as a marketing program, and, boy, is it getting marketing. Dove Men+Care is launching a short film called “Calls for Dad,” showing dads taking care of their kids, with a social component at #RealDadMoments.

Even NASCAR is getting intoFather's Day with a sweepstakes program called “NASCAR with Dad,” involving the organization’s official partners, Goodyear, 3M and Ford. The promotion at #NASCARwithDAD, dangles a Goodyear Blimp ride for two at Ford Championship Weekend at Homestead-Miami Speedway. NASCAR adherents can, if they want to try for the ride, share "NASCAR moments" on social media using the hashtag above.

But there's one tiny campaign that stands out, both because it's a niche brand that markets itself as a military-grade, male-care brand, and because they are spoofing other male brands, like Dove for Men.

Duke Cannon Supply Co. is a Chicago concern started by a former PepsiCo marketer, which sells male grooming products for "hard-working men." Its tongue-in-cheek digital campaign makes fun of slacker dads by offering faux gift items. One of the fake gift sets includes Dove for Men + Care and a mug that says #3 DAD with messages like "Nothing says 'Thanks for nothing, dad!' Quite like Dove for Men + Care!"

The company's whole idea is based on reinvention of the military bar of soap, which was originally about the size of a small brick, and which Duke Cannon gets from the same factory that made the original bars, according to Anthony Albanese, founder of the company and head marketer.

The Father’s Day sets the company is selling online and at retail contain the bricks of "Big Ass" soap, Duke Cannon grooming products and things like an LED flashlight/measuring tape, or a real hatchet in the case of one of the collections, called the Ned Stark, after the sword-wielding king from "Game of Thrones." The other thematic kits are named after TV fathers good and bad: Walter White, Phillip Drummond, and Cliff Huxtable.

"We thought, why don't we take some famous fictional fathers everyone can relate to and package them together and write copy that will relate to them," says Albanese. He adds that it's probably not entirely kosher to use the fictional names and their images, but that it's not a worry because the company is so small. "When I worked at Pepsi and was a director at Gatorade, we had to work with lawyers all the time. Big CPGs have to be risk averse. With a small brand, you kind of have to be willing to take a calculated risk."

Most of the company's sales are through about 1,000 stores, including non-traditional points that align with the brand’s machine-grade identity such as Carhartt, L.L. Bean, Duluth Trading, and Restoration Hardware. The brand also sells at Army and Air Force PX's.

Albanese tells Marketing Daily that recipients (or giftees) can also get their collection delivered in a surplus U.S. military field ammo box that are sent as they were found, whether rusty in places, or with a spent cartridge hidden in its recesses. The Big Ass bricks of soap come in several SKUs with names like "Victory," "Accomplishment" (black bar image below), "Productivity" and "Naval Supremacy." When you get the ammo box, you also get a Stanley screwdriver. For the ultimate in flossing.