Mobile ad exchange Nexage on Thursday revealed that 35% of the inventory available for real-time bidding (RTB) on its exchange is either interstitials, rich media or video ad formats. These three formats will represent over 50% of all mobile inventory by next year if current growth rates hold.

Video is the fastest-growing of the three, with 516% more video ads being available for programmatic buying in Q1 2014 compared to Q1 2013. However, Rich Media units (346% more) and interstitials (194%) were no strangers to growth either. 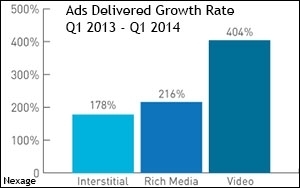 The use of more “advanced” ad units is representative of the maturation of the mobile RTB market. Nexage attributes the growth to “creative talent [being] applied to mobile-specific ads as advertisers and agencies aggressively embrace mobile.”