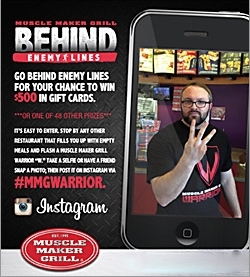 Through July 28, Muscle Maker Grill fans (known as “Warriors”) who snap photos of themselves making the brand's three-fingered "Warrior W" hand sign while visiting "any other restaurant that fills you up with empty meals," and then post the photos to Instagram using the hashtag #MMGWarrior, will be entered in a sweeps.

The campaign -- the first work for Muscle Maker from its new ad agency, Brunner, Pittsburgh -- is intended to build, demonstrate and reward customer loyalty, as well as to dramatize Muscle Maker’s claim that competing QSRmeals are “empty” and leave you “sluggish.”

The marketing strategy is based on anecdotal research and weekly meal plan sales, both of which indicate a high repeat rate among those who have tried Muscle Maker’s food.

The campaign is being supported with paid Facebook Timeline advertising, geo- and behavior-targeted to reach a mixed male/female audience, 18 to 34, with  casual to serious interests in fitness. In addition, there are 22” x 28” in-store posters, headlined “Mark Your Territory,” and “Muscle Maker Grill Warriors” T-shirts.

Muscle Maker Grill, based in Colonia, N.J., was founded in 1995 and first franchised in 2007. Its 70 locations in six states (New Jersey, New York, Connecticut, Pennsylvania, Illinois, Florida, Texas and California) serve high-protein, low-carb food with few additives. Many of its dishes are all-natural, and all of its beef is grass-fed. Free-range chicken and gluten-free options are offered.