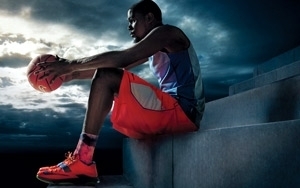 Despite stepped-up marketing spend heading into the World Cup, Nike reported stronger-than-expected results for its fiscal fourth quarter. The company says its gains were fueled by new products, as well as strong social media platforms and its digital advertising strategy, including the “Risk Everything” campaign.

Revenues rose 11% to $7.4 billion, with sales of Nike brand products climbing 13% to $7 billion, and revenues at Converse rising 15% to $410 million. The company says it saw revenue growth in every region, key category, and in men’s, women’s and kids’ businesses. Profits increased 5% to $698 million.

In a conference call announcing the results, company executives credited its success, at least in part, to social media and digital marketing. “An ongoing two-way dialogue with consumers is a critical element of our digital ecosystem,” says Mark Parker, president and CEO. “It provides us insights that drive innovation, strengthens consumer connections to our brands, and provides a platform for consumers to interact with each other. Through our social media platforms, we leverage the power and passion of sport to deepen our relationship with our consumers.”

As an example, he mentions the “Risk Everything” campaign. “Two of the campaign’s videos, ‘Winner Stays’ and ‘The Last Game,’ have set new records for engagement with over 370 million digital views and growing,” he says.

The Beaverton, Ore.-based company says increases in marketing spend leading up to the World Cup, as well as key product initiatives, drove its demand creation costs up a whopping 36% to $876 million. It says it expects those costs in the first quarter to be up some 30%, “as we continue to leverage the energy of the World Cup.”

Future orders for footwear and apparel, scheduled for delivery from June through November 2014, total $13.3 billion, an 11% increase from the same period in the prior year.

Rival Adidas is also claiming World Cup victory, saying that it will “definitely achieve our goal of €2 billion in sales in the football category in 2014, once again underlining our outstanding position as the clear number one in football globally.”

That company is also crediting its marketing and social media campaigns for strong sales, and says it will sell 8 million World Cup jerseys, more than ever before. It predicts it will sell more than 14 million footballs in the design of the brazuca, the Official Match Ball of the 2014 FIFA World Cup.