Pet 'Humanization' A Boon For Marketers 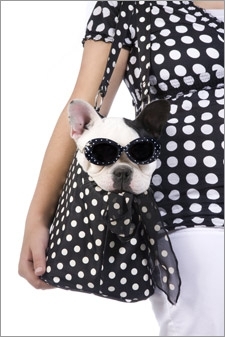 Pet humanization -- the push to provide our four-legged companions with human-quality products -- has given rise to an important type of pet owner: the premium pet product shopper, according to Packaged Facts.

A number of pet product manufacturers and retailers have been crediting the humanization trend with driving their business, and premium pet product shoppers will help drive industry growth as the pet market reaches projected sales of $73 billion by the end of 2014, according to the company’s latest report, “U.S. Pet Market Outlook, 2014-2015.”

In force for several years now, the humanization trend has multiple facets. Foremost, it’s a natural expression of the “pets as family” trend, whereby pet owners treat their pets like children and are highly receptive to products similar to the ones they use for themselves, said George Puro, the analyst who wrote the report.

“One of the brands that emphasizes the humanization trend is Merrick Petcare,” Puro tells Marketing Daily. “The company touts its humanized canned dog food recipes. These have names that might even sound appetizing to a pet parent -- such as Brauts-N-Tots, Cowboy Cookout and Grammy's Pot Pie.”

In terms of retailers, PetSmart has embraced the humanization trend and there's no sign of it slowing down, he says.

Not coincidentally, many of the services and products entering the market today are directly reminiscent of human fare, no doubt appealing to the pet owner as much as the pet.

Packaged Facts has tracked the emergence of premium pet product shoppers and have confirmed the cohort’s behavior patterns going back several years. For example, the company’s February/March 2013 pet owner survey found that a resounding 70% of pet owners would be willing to spend extra to ensure the wellness of their pet.

Other surveys by the company suggest that pet owners’ desire for premium products influences their channel and brand choices. Likewise, close to one-third of pet product buyers (30%) agree that “I prefer to shop at pet product retailers that offer the best products available, even if they are more expensive.”

Premium pet product shopping is most common among higher-income households. U.S. households earning $70K or more account for 54% of the aggregate pet market expenditure, and Packaged Facts believes these consumers to be footing the lion’s share of the bill for premium pet products and services. Generally speaking, better-off pet owners are also more likely to have been less affected by economic doldrums and are recovering more quickly.

The takeaway for pet merchandise marketers is that pet parents consider their pets like family members, and a great way to appeal to them is to sell them something they'd think about buying for themselves, Puro says.