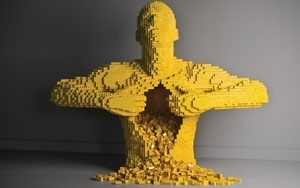 Legos are toys, videogames, robotic sets, a social network and recently, a movie. In fact, a TV series has been confirmed to air in the UK on CBeebies in late 2016.

But brand extensions can also exist in the realm of the aesthetic.

Enter “The Art of the Brick,” the world’s largest display of Lego art by Nathan Sawaya, who curates the eye-popping exhibition at Discovery Times Square, now back for a second staging.

But the power of his impressive creations, which includes astounding replicas of famous artwork, such as Van Gogh’s “Starry Night,” DaVinci’s “Mona Lisa” and a 3-D version of Grant Wood’s “American Gothic,” is its ingenuity.

After all, Legos has been child’s play for decades. Then advertisers and marketers realized the tiny pieces could click into multimedia merchandising. Sawaya, a former corporate lawyer, saw something different: The chance to transform a kid's toy into art.

For “Art of the Brick,” which doubles as a hit parade of some of the world’s masterworks, Sawaya has recreated Michelangelo’s “The David” and The Parthenon, as well as an array of colorful originals, including a swimmer in motion with a real sense of fluidity. The whimsical will love the giant pencil, peace sign and Statue of Liberty, while dinosaur fans experience the wow factor with an 80,000 piece T-Rex.

Then there is the art of technology.

Just ask moviegoers eager to catch Captain America, The Hulk, Thor and Iron Man in the upcoming "Avengers: Age of Ulron," scheduled for a May 2015 release, a sequel to the 2012 release of "The Avengers." 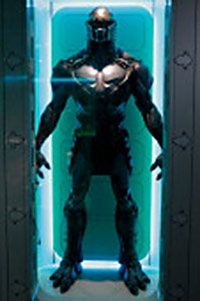 While three of those Marvel superheroes — Thor, Iron Man and The Hulk — debuted in the 1960s, Captain American soared into comic legend during WW II. On the TV front, the iconic good guys morphed into "Marvel: Agents of S.H.I.E.L.D.," Marvel's Avengers Assemble" and "Marvels Hulk and the Agents of S.M.A.S.H."

Discovery Times Square, in collaboration with NASA and The Science & Entertainment Exchange, a program of the National Academy of Sciences, produced “Marvel’s Avengers S.T.A.T.I.O.N. (Scientific Training and Tactical Intelligence Operative Network), an extraordinary interactive experience where visitors are recruited to join S.H.I.E.L.D. and enter their official training headquarters.

Exhibition-goers drill deep into the Marvel film world, where they experience dozens of large-scale touch interfaces, working robotics, augmented reality and motion-response applications. Visitors get access to some of S.H.I.E.L.D.’s key artifacts recovered after the Battle of New York, such as Captain America’s birth pod, the Tesseract portal Device and Loki’s scepter, a hermetically sealed Chitauri, as well as intelligence files and classified studies.

The smart, engaging exhibit spans more than 10,000 square feet and incorporates 140 video screens, in addition to actual costumes, movie props and the hammer, the largest hologram in New York.

Much as advertisers push the fun side of branding, Discovery utilizes the same images to promote the educational: math, technology and genetics. “Marvel’s Avengers S.T.A.T.I.O.N.” lets visitors map the stars to find Asgard, operate Iron Man’s suit or test themselves physically vs. Captain America.

Take a cue from the master. According to Stan Lee, creator of The Avengers and former chairman of Marvel Comics, “this exhibit so far exceeds my wildest expectations.”