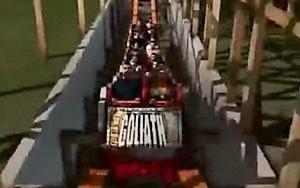 In further evidence that Americans are dialing up the fun factor this summer, Six Flags Entertainment Corp. says its second-quarter revenue grew 4% to a record $377 million.

While attendance at its parks actually dropped 8%, higher guest spending fueled a big jump in net income, which rose to $85.3 million, up from $66.1 million in the year-ago period.

"We are squarely focused on executing our long-term strategy and remain confident in our ability to deliver yet another record year in 2014," says Jim Reid-Anderson, chairman, president and CEO, in its release. "The 9% growth in our Active Pass Base, record-high guest satisfaction ratings, and robust guest spending per capita through the first six months of the year all indicate continued strength in our business.”

The company attributes the drop in attendance to 8.2 million guests to the long, harsh winter, which it says expanded school calendars and slowed early-season attendance. The Grand Prairie, Tex.-based company recently announced plans to expand to China. It operates 18 parks in North America.

Early indicators point to strong performance at other theme parks as well. Back in May, industry giant Disney reported that it too was experiencing strong performance, with revenue at its park and resort division rising 8% to $3.56 billion for its fiscal second quarter. (It reports its next quarterly results next month, and owns the top six of North America’s 10 biggest parks.)

And at Cedar Fair Entertainment Co., which owns Cedar Point in Sandusky, Ohio, as well as such properties as Kings Dominion in Richmond, Va., and Knott’s Berry Farm in Los Angeles, says it is anticipating record results this year, too. “Our season pass sales and group event bookings continue to be favorable when compared with the same period a year ago and our average in-park guest per capita spending continues to grow consistent with our long-term strategy expectations,” it said in an announcement earlier this month, despite attendance declines.

Those hopeful indicators follow a robust 2013. “We’ve seen healthy growth, with the major theme park operators posting 5.4% growth overall,” writes John Robinett. SVP/economics for AECOM, an engineering design firm that tracks the annual performance of the theme park industry, in the report analyzing last year’s results, adding that the top 25 theme parks grew at 4.3%. Attendance at water parks around the world grew by 7%, with Brazil among the strongest markets, as did museums around the world, led by big increases in attendance at London’s museums.