Its name suggests otherwise, I know, but the viewability problem is supposed to get smaller, not bigger.

Half a year later -- half a year with viewability as a focal point, no less -- and the ad industry has gone backwards in its battle against viewability. The overall war is against ad quality, and exchanges are losing that too.

Integral gives ad exchanges a “true advertising quality” (TRAQ) score based on a mix of fraud, viewability, ad clutter, brand safety and professionalism ratings. The TRAQ score for exchanges in Q2 2014 was 576 (out of 1000). That’s down slightly from the 578 score Integral gave exchanges in Q1 2014, which was down from the 597 score exchanges received in Q4 2013.

The Media Rating Council (MRC) established viewability as a legitimate online ad currency for display advertising just before Q2 2014 began, with “viewability” meaning 50% of an ad’s pixels being in-view for at least one second. 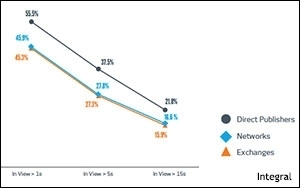 In a press release, Integral notes that viewability rates didn't improve despite the MRC’s lifted advisory. “This is expected to change in the upcoming quarters, as the industry adjusts and adopts new expectations,” the company writes in its release. In its Q1 2014 report, though, Integral made a similar prediction, writing that viewability numbers were expected to increase because of the MRC’s lifted advisory.

That’s not to knock Integral’s predictive powers, but it does show that viewability won’t automatically become less of a problem just because it's now being used as a currency and people are talking about it. It’s a much more enigmatic predicament.

That much, at least, is viewable.