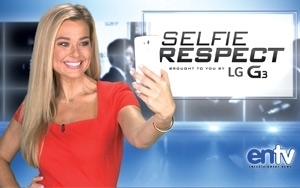 Using a cell phone is generally frowned upon in movie theaters, but as part of its overall marketing program to showcase its new G3 smartphone, LG is showing off the ease of snapping selfies in cinemas.

Working with Screenvision’s creative services group, 40 Foot Solutions, LG’s new phone is showcased in an ENTV segment that will run before movies on Screenvision’s 14,200-screen network. In the segment, ENTV host Melana Scantlin explains how selfies have taken over Hollywood, showcases some popular examples and then takes one of her own using an LG G3 smartphone.

“In pre-show [advertising] the more relevant and entertainment centric it is, the better it is for the audience,” John McCauley, EVP, chief marketing officer and strategic alliances at Screenvision, tells Marketing Daily. “It’s a nice way to show context in Hollywood [and] the product is integrated into the programming.”

The Screenvision program, which will also include an added trivia element to maximize engagement, is part of an overall effort by LG to show off some of the features that making taking selfies easier on the new G3 smartphone, McCauley says.