What Do Women Think Of Your Mobile Ads? Meh! 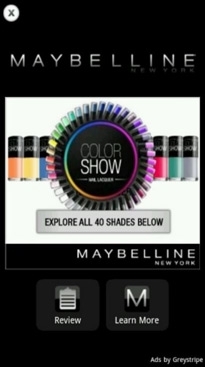 Even the IAB, that relentlessly perky (unless the FCC/FTC is involved) cheerleader of any and all your ad formats and technologies, had to admit “it’s a challenge to find consistent mobile advertising success stories” from the women they asked recently.

Partnering with Meredith’s MXM agency and its Real Women Talking Community, late last year they set out to get real women’s responses to mobile advertising. About 100 women were asked about their interactions to mobile ads and also asked to provide screenshots of ads the were seeing.

We can cut to the chase. A lot of these ads are misfiring or just not connecting with women.

First of all, many in this focus group complained that the only good thing about banner ads on mobile phones is that they are easily ignored or swept out of the way. One woman got to the real point about the disconnect of standard interruptive advertising on phones. “When I’m on my phone, I’m needing to do something quickly and [ads] can get in the way.”

Another respondent commented that many mobile ads just fail technically or fill the screen at the wrong time. She blames the advertiser and gets a negative impression of the brand.

They want real relevance, and often seem willing to excuse interruptions if the ad is creative and genuinely targeted to either their interests or their current context. One woman sent in a full-screen ad for healthy carrot juice that got to her after a 10K run. Interestingly, several women seemed to reward mobile ads, even full-pagers, that engaged them with very simple visual messages or clear options.

A very colorful Maybelline ad that preceded a solitaire round was welcomed by one woman because it was visually pleasant and gave her a couple of choices to drill further or dismiss. A Groupon spot just had a few luscious sushi on a velvet black background.

There is nothing especially earth-shaking or new in these observations, except that they are given the added weight of coming from consumers rather than ourselves. You need to get noticed and to do so outside the usual banner format. But you need to do it in a creative and highly relevant way that diffuses frustration with interrupting her. Relevance cuts several ways on mobile. It is not just targeting a person, but also a context. What is this mobile user doing now and trying to achieve when on her device?

But I am struck especially by how these women called up ads that were simple in message, uncluttered, and visually lush. Mobile display ads of all sorts are starting to look too much like shrunken Web ads. As publishers, ad nets and advertisers desperately try to follow the mobile migration they are treating devices too much like the Web and struggling to stuff too much information into those units.

One of the things I don’t see enough of are ads that recognize the user probably doesn’t want to see the message right now but may be willing to engage later.

The task-driven nature of most of our mobile sessions would seem to invite ad formats that let us defer our attending them until later. Maybe we should consider in-ad options for emailing information to yourself, pinning an ad to your home page or bookmark? After all, publishers discovered long ago that people use their phones often to triage content for later consideration on other screens. Shouldn’t ads let us triage them too?

More detail about the MXM/IAB focus group is online.

advertising, mobile, native advertising, research, rich media advertising
1 comment about "What Do Women Think Of Your Mobile Ads? Meh!".
Check to receive email when comments are posted.
Next story loading