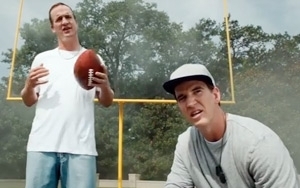 The rapping Manning brothers are back again for DirecTV, this time to pitch a new fantasy-football channel offered by the satellite television service.

“We caught lightning in a bottle last year,” Jon Gieselman, senior vice president of marketing at DirecTV, tells Marketing Daily. “We had a new product to promote [this year], and we considered a few ideas, but we kept coming back to this.”

The music video and song features more repetition of the word “fantasy” than one person can count. (The refrain of the song is, “Fantasy, Fantasy, Football Fantasy.”) Imagery of both the song and video include catching a pass thrown by Peyton only to find the football is filled with nachos, a shower of mini footballs rather than water and floating through space with the brothers’ father, Archie Manning. (The video also features cameos from hall-of-fame quarterback Joe Namath making a romantic stew and New York Jets running back Chris Johnson giving a fan his signature coif.)

“We knew the bar was high. The problem with a sequel is you might fall short of the original,” Gieselman says. “Last year’s concept was original. You always want to try and do something different.”

The video is part of DirecTV’s larger promotion of its “Sunday Ticket” professional football package. In addition to more traditional television commercials and advertising, the Manning brothers video is meant, like last year, to spread across the Internet virally.

“This is part of a much larger marketing plan that we’re executing behind Sunday Ticket,” Gieselman says. “[The Manning brothers] are always up for doing something zany, and they’re great sports about it.”