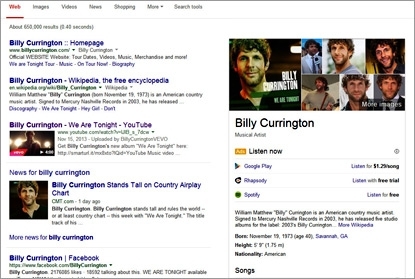 Google has begun testing "Listen Now" ad units, along with Spotify, Rhapsody and Apple's Beats Music, to simplify purchases for consumers through an advertisement. In the Listen Now ad unit, consumers searching for music by an artist can preview a song or songs by clicking on the button that appears in search results, which takes the listener to one of several music services either on desktop and mobile.

"We're happy to help users quickly find legitimate sources for their favorite movies, music and more via Google search," a Google spokesperson says. "As always, the ads are ranked according to a variety of factors, including bid, relevance, and click-through rate."

The Google spokesperson would not confirm the addition of Listen Now means anything more than the ability to click-through the ad unit to hear tunes on Google Play, Rhapsody or Spotify.

The ad unit, once again brought to the forefront by The Wall Street Journal, signals a more important move toward a "buy" button in ads and in search results. Bringing ecommerce to the search engine creates another revenue stream. However, the buy button in banner and display and ad units is not new, but rather is a service waiting for consumers to feel comfortable and technology to mature.

Some suggest the move just adds music to the existing movie and TV ad unit running since last year, but a Buy button would more favorably compete with Facebook's and Twitter's tests. It also reduces the number of click and makes bidding more competitive. For consumers, a buy button in search resuts would make it easier to purchase content, give Google more information about the consumer to retarget and cross target products, and eliminates the need to reenter credit card information to make the purchase.

Last week, engineers at Two Tap publicly introduced the feature as an API to integrate into a variety of applications. The feature backed by some heavy technology investors.

In June, Klick Push rolled out a platform allowing brands to integrate music into banner ads or use tunes as a way to drive loyalty. The company licensed through recording labels about the rights to about 10,000 songs.