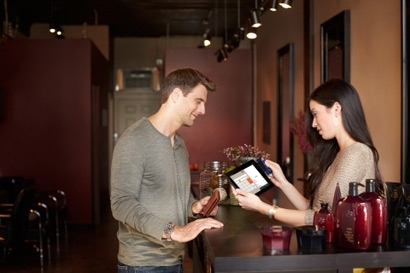 Square just got a big new competitor. Amazon on Wednesday announced its expansion into mobile payments with a new point-of-sale (POS) service that combines a mobile app with a secure card reader that lets small businesses process card transactions via smartphones and tablets.

That makes the service—dubbed Amazon Local Register—a direct rival to similar POS offerings from heavily venture-backed start-up Square, as well as PayPal. A key selling point for the Amazon system is that it would charge businesses 2.5% for each transaction swiped compared to 2.75% for Square Register and 2.7% for PayPal Here.

Amazon is also launching Local Register with a promotion that lowers the rate to 1.75% for customers that sign up before October 31.

“We understand that every penny and every minute counts, so we want to make accepting payments so easy and inexpensive that it no longer gets in the way of a business owner doing what they love - serving their customers and growing their business,” stated Matt Swann, vice president, Amazon Local Commerce.

Jordan McKee, a senior analyst with 451 Research, noted that Amazon’s push into mobile payments has been rumored for over a year as the company looks to expand its empire into offline retail. “At the end of the day, less than 10% of transactions occur online,” he said. “The real opportunity is at brick and mortar locations. So Amazon has been eying a way to tap into that.”

Offering a lower transaction processing rate—paired with its reputation for strong customer service--could also help it gain traction, especially among independent contractors that may be especially sensitive on pricing, added McKee.

Launch of the POS system also comes a couple of weeks after Amazon quietly introduced a consumer-facing mobile wallet app in the Amazon Appstore and Google Play. While the Amazon Wallet doesn’t yet support mobile payments or the ability to store credit cards, the move underscores the company’s wider ambitions for mobile payments.

“That’s going to be the tip of the iceberg on the wallet side as they start to build out that value,” noted McKee, who likewise sees more services being added to Amazon Local Register over time. “This is really a long-term play, I don't think it’s just, here’s a point-of-sale system, take it or leave it.”

On the mobile front, Amazon in June also debuted its long-rumored smartphone, equipping the new Fire phone with a “Firefly” button to help users identify and buy items like books, songs and movies more easily from its online store.

When it comes to Local Register, the company said its card-swiping attachment and software will be compatible with devices including the iPhone and iPad (running iOS 7), Kindle Fire tables, select Android smartphones and eventually the Fire phone, as well. The system comes with 24-hour customer support and in-app reporting to track sales trends, peak sales times and bottom-line performance, among other metrics.

For its part, Square has recently been adding various e-commerce services beyond its core POS system for merchants to help fend off challenges from bigger players like PayPal and Amazon. In that vein, it acquired San Francisco-based food delivery start-up Caviar earlier this month to provide delivery from restaurants and cafes it works with.