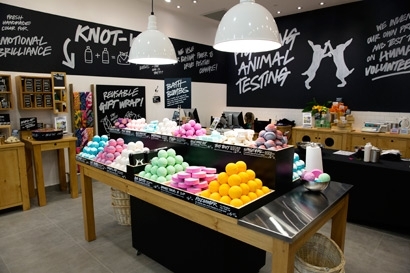 In a bid to stretch well beyond its beauty boutiques, Lush Cosmetics is introducing Lush Kitchen, a new online concept that cooks up limited-edition beauty products and then ships them to consumers the same day. And in addition to steadily adding new stores throughout the U.S. and Canada, it’s also extending its reach in expanded formats.

“We’re adding spas within some of our boutiques in such markets as New York, San Francisco and Chicago,” Mark Wolverton, president and CEO of Lush North America, tells Marketing Daily. “And we’re also looking at building some stores that are much bigger than our usual format, which would include spa services and more room for customer experimentation.”

He expects Lush Kitchen, already up and running in the U.K., to be available in North America by May. The Kitchen concept came about, he says, “because our footprint is only so big, and we don’t have enough space in stores.” So the site cooks up small batches, manufactured and shipped daily, which satisfies two cravings of Lush customers. “First, because we use so few preservatives, they want their beauty products to be as fresh as possible. And second, it provides a window into our manufacturing business, almost like a cooking show. It bridges the gap between retail and the freshest products, made, visually, right in front of our customer. She always wants to know more about our products, and finding a way to do it digitally has been a very exciting journey for us.”

The 18-year-old brand, which now has 900 stores in 50 countries, has been on an expansion tear in the U.S. and Canada, and just passed 200 locations, including stores-within-stores at some Macy’s locations. The brand’s fun-loving fan base are frequent shoppers, and expect an endlessly evolving selection of fizzy bath bombs, exploding bubble bars, or solid shampoos.

“But the core connection we have with our customer is about ethics. She loves us because we use products that are safe, sustainable, never tested on animals and that pay attention to fair trade practices. The idea that we use so much less packaging is also important.”

“She’s really interest in every ingredient – what it is, where it came from, how it’s harvested, and what it can do for her skin.” (About 5% of its customers are men. Wolverton’s favorite is a custardy body lotion called Sympathy for the Skin, which contains banana and vanilla.)

He estimates that there are about 300 products that could be rotated though the Kitchen production process, and so far, describes customer reaction as very strong. “It already accounts for about 10% of online sales,” adding that its online sales are growing at about 40% a year.

Other plans for the brand, which he says is growing at about 30% and is expected to have revenues of $300 million this year, include an all-new Halloween lineup, Christmas collection, a revamp of all its color cosmetics, and a relaunch of its Gorilla fragrances. But while customers expect constant innovation, he says the brand has learned it needs to go slow. “There was one year when we launched a new product every week for an entire year,” he says. “We now launch products in batches, to make it a little more manageable.”