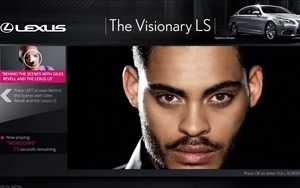 Taking a page from the online advertising options playbook, Lexus recently ran an interactive TV campaign where viewers could “skip” TV commercials -- similar to what they would do with online video advertising.

The campaign ran from June 2 to July 13, 2014, promoting the Lexus LS on more than 15 connected TV platforms including Roku, XBox 360, and Amazon Fire TV.

The effort was put together by Lexus’ agency Saatchi & Saatchi’s Team One, based in Los Angeles, with adRise, which develops branded video-on-demand apps for TV content providers, as well as other apps for connected TV content platforms.

Two Lexus spots -- a 15-second and a 30-second spot -- were produced. When a spot appears, viewers are given a prompt: “You can skip in five seconds.” Using their TV remote -- as they would a computer/tablet/phone -- they can the skip the message.

The screen will then move to program content  -- or to another commercial if there is more than one ad in a commercial pod.

“The idea was to provide the same level measurability, so marketers can run the same unit across screens,” Farhad Massoud, chief executive officer of adRise, told Media Daily News.

Despite the option to skip the messaging, the Lexus ad performed well. Lexus' interactive TV campaign achieved a 73% completion rate. For this benefit, adRise charges a premium price for those completed ads.

Massoud says there must be strong creative to achieve these results. For other ad efforts, adRise has seen a 10% click-through rate for interactive video ads.

Teri Hill, Lexus media manager, stated: “We’re now facing an age where brands are increasingly expecting the same viewing flexibility and proof of performance from television advertising as they do from any online marketing campaign.”

Team One also produced another longer interactive ad unit, where the user could telescope into a two minute “Behind The Scenes” video.