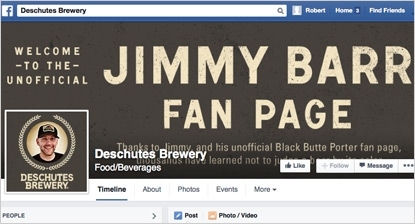 The campaign is the first work from advertising agency TDA_Boulder, Boulder, Colo.

For one week, Aug. 19-26, Deschutes turned its Facebook page into the “Unofficial Jimmy Barr Fan Page.” It will also produce special “Limited Release” six-packs of Black Butte Porter, labeled “Unofficial,” and tagged “Our way of thanking our Unofficial Social Media Director.” (The beer will be the same.)

While Barr’s position does not involve actual pay, neither does it involve actual work — other than to keep on, if he so chooses, with the Facebook “Unofficial Black Butte Porter Page” that he has been diligently keeping on with for the last five years.

Keyword-targeted Facebook advertising, via Kinetic Social network, promoted the takeover. Different page posts, both with Barr’s picture, will either announce his new title, or tag him as “a hell of a guy.”

“The way we see it, the only thing better than a ‘like’ is an unofficial like,” says Deschutes Director of Marketing Jeff Billingsley. “That’s where Jimmy comes in. We’re glad to have him aboard.”
beer, beverages, linkedin, marketing, promotion, social media, twitter
Next story loading