A Hot, Hot August For The Industry 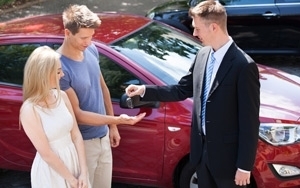 August is unusually cool in many parts of the country, but air conditioning is desperately needed in auto dealerships this month, as cars and trucks are moving out of lots at a blistering pace. May had been the best sales year to date, but marketing firm J.D. Power, with help from its LMC Automotive unit, predicts August new-vehicle retail and total sales will beat even May’s volume.

The company sees retail volume reaching 1.3 million units and total light-vehicle sales, which includes fleet, topping out at 1.5 million units this month, a 3% increase versus the month last year, and 60,000 above last month. A little inside baseball: If J.D. Power is on the money, August will be the sixth consecutive month where the seasonally adjusted annualized rate of retail sales (or SAAR, an academic total-year number that assumes the whole year — variations intact — behaves like August) exceeds 13 million. The firm is predicting that August will have a 13.6 million SAAR. With Fleet that numbers goes up considerably, but fleet often runs inverse to consumer demand, as fleet is the commercial orphanage for unwanted cars and trucks.

J.D. Power says a big part of the sales gains will come from the traditional auto blowout on Labor Day, when automakers make a special effort to jettison last year's models, and maybe sell a bunch of the 2015 cars and trucks just rolling onto dealer lots.

John Humphrey, SVP of J.D. Power's global automotive practice, says the volume this month reflects — and is, hopefully, a bellwether — of continuing industry health, as consumers are clearly willing to part with their cash. He said, in a statement, that consumer spending on new vehicles will reach $39 billion this month, and that, if it does, August will have seen the highest-ever level of consumer spend for new cars and trucks on record; and it will be the second-highest month ever behind July 2005  — when auto sales, including fleet, were topping 16 million per year.

And, indeed, LMC Automotive sees sales breaking the sweet sixteen million mark for the year. For the full-year forecast LMC is sticking with 13.5 million units for retail and 16.3 million units for total light-vehicle sales -- both 5% increases from 2013 levels, per the firm.

An especially sanguinary indicator is that dealers aren't having to lure customers through doors by putting cash on vehicle hoods. "The record consumer spending is fueled by both high sales volumes and high transaction prices," he says. The firm reports that average new-vehicle retail transaction price in August is $29,300, a record high for the month, beating $28,898 last August.

Jeff Schuster, SVP of forecasting at LMC Auto, argues that the auto market boom really is a bellwether for the economy at large. "As a very robust summer selling season winds down, optimism continues in the auto industry for the remainder of 2014, with expectations of economic growth beginning to catch up to the growth in autos. As we look at scenarios for 2015 light-vehicle sales, external factors, including global conflicts and capital flight from emerging markets, account for the majority of the risk to further and expected growth in the U.S."