Big media companies are moving to lessen their reliance on advertising revenue in favor of other sources of revenue including subscriptions, syndication, and production fees, according to a new analysis by SNL Kagan.

Among the examples cited by SNL Kagan is CBS Corp., which has decreased its dependence on advertising revenues in part by spinning off CBS Outdoor, leading CEO Les Moonves to boast: “We're now much closer to a 50/50 split of advertising and non-advertising revenue.”

Going forward, CBS Corp. will rely more on licensing and syndication revenues generated by its original content, with Moonves noting that in the long run, “ownership of content is the key to our success.” CBS Corp. is also providing programming to other media companies, including Showtime, The CW and ABC.

SNL Kagan also pointed to the Walt Disney Co.’s moves to further diversify its revenue sources, citing a recent statement by Disney CEO Bob Iger: “We've made a conscious decision as a company to essentially not be as reliant on advertising as we were in the past.”

According to Iger advertising currently contributes a bit over 20% of the company’s total revenues, reflecting deliberate strategic decisions. Going forward, Iger added:, “you're going to see basically continued pressure on traditional advertising platforms.” Meanwhile revenues from other sources, including theme parks, are growing.

Time Warner’s decision to spin off Time Inc. -- its troubled magazine publishing division -- as a stand-alone business, indicates a similar strategic repositioning. In the future, Time Warner will rely more on subscription revenues from sources like HBO and entertainment revenues from Warner Bros.

Whether it’s deliberate or not, other media conglomerates are also seeing ad revenues decline as a proportion of their total business, SNL Kagan noted. The list includes NBC Universal, where ad revenues at its broadcast segment fell 1.7%, even as total revenues for the broadcast segment jumped 4.9%, thanks to growth in retransmission and content licensing revenues. Ad revenues at NBCU’s cable networks segment declined 2.2% in the most recent quarter, although total revenues for the segment increased 2.6%.

Separate analyses of U.S. advertising spending have revealed growing seasonal variations, due to events including elections and Olympics, and in many cases big media companies are seeking to reduce the impact of these seasonal variations on their bottom line.

Digital advertising, the fastest-growing part of the ad business, remains in many cases a fairly small contributor to the bottom line for most major media conglomerates. For example, Disney’s interactive media segment produced revenues of $270 million in the second quarter of 2014, representing just 2.2% of the company’s total revenues of $12.47 billion in the quarter. 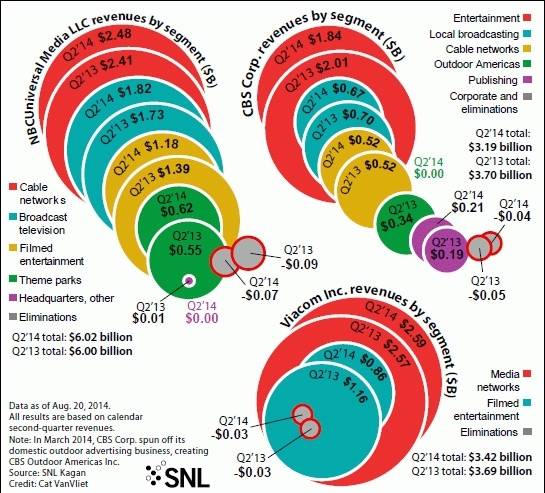