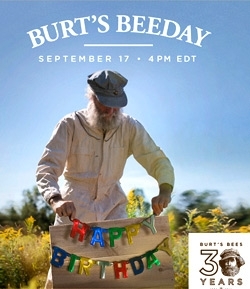 is gearing up to celebrate the company’s 30th birthday with an event hosted by its founder.

Burt Shavitz, company co-founder, will host a live online experience at 4 p.m. EDT on Sept. 17 with the theme “Nature Made Us Who We Are.” The live Web event, plus paid social support, are by advertising agency Baldwin& of Raleigh, N.C.

The event will show Shavitz outside his Parkman, Maine home accompanied by improv actor Dan Chamberlain and bluegrass band Tumbling Bones. He will read aloud fans’ “birthday messages to the bees,” chosen from submissions hashtagged #burtsbeeday—all of which will be viewable as they come in via Facebook and Twittter, along with an event countdown, at burtsbeeday.com.

Burt's Bees was purchased by The Clorox Company in 2007.

The readings will be broken up by short segments including “Greetings from our sponsors” (fruits, the sun); “Burtisms” (“What a bear does in the woods is his own business.”); child-taught “Burt Learns Social”s (Lesson 1: Hashtags); plus various other Burt- and bee-related trivia.

Paid support began Sept. 8 with promoted posts on Facebook and Twitter. The media buy, targeting both Burt’s Bees fans and non-fans with September birthdays, is by AKQA, San Francisco. Additional support will come via email (to 700K subscribers) plus sites/channels Facebook.com/burtsbees , Twitter.com/burtsbees, and YouTube.com/burtsbees .

After the event, the complete, unedited video as well as a two- to-five-minute cutdown will play at the same site, burtsbeeday.com, through Oct. 31. Additionally, all fans whose entries were chosen will get a video clip of Burt’s reading.

“We're asking fans of the brand to participate with us in thanking nature, and also giving them the chance to get a rare look into the life of our co-founder, Burt Shavitz,” says Burt’s Bees Associate Director of Marketing Matt King. “Nature and our fans are integral to who we are as a brand, so it’s only natural to celebrate them for our 30th anniversary.”

The target demographic for this 30th Beeday event is our existing global social media community and fans of the brand, he says.

“Burt’s Bees has always done things a bit differently, so our 30th anniversary is an opportunity to celebrate how our unique history shapes who we are today, even under different ownership,” he says.  “People ask us all the time if there is a real Burt. There is, and it’s what makes being a part of the brand so special.”