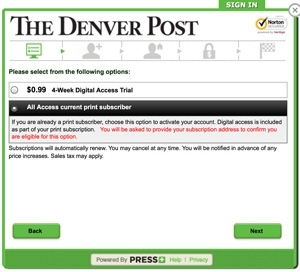 Two of the world’s largest third-party providers of online paywalls are joining forces, with Tuesday’s announcement that R.R. Donnelley has sold Press+ to a group of investors led by 3TS Capital Partners.

Press+ will be merged with the latter’s Piano Media, a paywall provider based in Austria, whose business has thus far been focused on central Europe. Terms of the deal were not disclosed.

The companies also announced that former Dow Jones executive Kelly Leach has been named CEO of both companies. Leach most recently served as The Wall Street Journal’s managing director for Europe, the Middle East, and Africa, as well as publisher of the WSJ’s European edition, where she helped develop the international newspaper’s digital subscriptions strategy.

Leach said the merged companies will focus on developing new products and strategies to help publishers monetize online traffic, noting: “The data that Press+ and Piano have gathered on subscriber behavior, digital subscription products and marketing practices employed by publishers is the deepest and broadest of any company in the world.”

For its part, Piano Media operates paywalls for over 70 online news publishers in Europe and internationally, including newspaper, magazine and broadcast media sites in Germany, the United Kingdom, Spain, Poland and Slovakia, as well as the U.S. and India. In Europe, it counts some of the continent’s biggest media groups among its customers, including M. DuMont Schauberg, Verlagsgruppe Passau, DC Thomson, Agora S.A. and IBT Media.

It’s worth noting that R.R. Donnelley is selling Press+ just three years after acquiring it -- suggesting that growth may not have matched expectations. News of the sale comes as some big newspaper publishers, including The New York Times Co. and Gannett Co., have seen revenue growth from their online pay walls slow. (These paywalls are operated independently, not by Press+ or Piano).