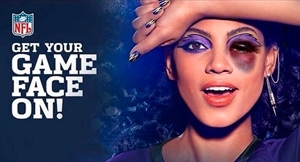 It was bound to happen: After constant efforts from beauty companies to strike viral gold with young women, those women are hitting back with viral campaigns of their own. And right now, their targets include Roger Goodell, commissioner of the National Football League, and a burgeoning #BoycottCoverGirl campaign.

CoverGirl, a Procter & Gamble brand, is the official beauty sponsor of the NFL, and a photoshopped version of its “Get Your Game Face On” ad, in which the woman sports a black eye as well as the team colors for the Baltimore Ravens, is building steam on Twitter. (The ad and the boycott are the work of Adele Stan, senior digital editor at The American Prospect.) And Jezebel points out that the CoverGirl Web site, which gave women ideas about how to use cosmetics to cheer on their team, has vanished: “Is the page overloaded with gawking makeup fans, or is CoverGirl rethinking its partnership with the NFL?” Jezebel wonders.

We wonder, too. The site is back up today, with the “Get Your Game Face On” promotion right there on the home page. And in the wee hours, its PR team did respond to questions with this statement: “As a brand that has always supported women and stood for female empowerment, CoverGirl believes domestic violence is completely unacceptable. We developed our NFL program to celebrate the more than 80 million female football fans. In light of recent events, we have encouraged the NFL to take swift action on their path forward to address the issue of domestic violence.”

We’re betting that “swift action” will soon translate to increased cries for Goodell’s ouster. A women’s rights group called UltraViolet is also lighting up Twitter. The Washington, D.C.-based advocacy group flew #GoodellMustGo banners over football stadiums in Cleveland, Greater New York City/New Jersey, and San Francisco this weekend, and intends to do so over Indianapolis next.

While the NFL is still hustling to contain the uncontainable fallout of the Ray Rice domestic violence story — yesterday appointing a team of four women to further investigate the league’s reaction to social issues — it’s becoming increasingly clear to everyone with two eyes and a Twitter account that the mess is bigger than football, and bigger than brands. It’s as big as women everywhere.

With women accounting for as much as 45% of the NFL’s fan base — a crowd the NFL and its sponsors have wooed relentlessly, with everything from pink uniforms for breast cancer awareness to a line of haute apparel — the NFL’s handling of the Rice affair “flies in the face of how women define themselves as human beings,” says Kelley Skoloda, a partner in Ketchum’s global brand marketing practice, and an expert on marketing to women. “Women define their personal success as being healthy and taking care of themselves. If they’re moms, that includes taking care of their children.” So when they see the NFL not taking domestic violence seriously, they’re not just offended, she says. “They’re hurt.”

Part of the problem, adds Barry Janoff, executive editor for NYSportsJournalism.com, is that even as the NFL has been winning over legions of young female fans, it has strictly been playing defense. “It’s become reactive rather than pro-active” on everything from domestic violence, child abuse, drunk driving, player concussions, and race -- waiting until there was public outcry before taking a stand. “And the NFL only now seems to be realizing how strong its social media and female fan base has become,” he tells Marketing Daily.

For brands like CoverGirl, which had a big social success with its Grey-created #GirlsCan campaign earlier this year, whether Goodell keeps his job or not isn’t the question. It’s whether it can keep customers it has been blasting with all that strong-women empowerment messaging, when more women are feeling that P&G is in cahoots with a league that prefers to see women as punching bags. “Women want to see decisiveness,” says Skoloda, pointing out that 4 in 10 women are now primary wage earners, “and they’re increasingly aware of their economic clout.”

What’s interesting is that women don’t want to back away from football. They’re fans. It’s that they want football to fix its problems. “This isn’t a question of whether the NFL can appeal to women, but whether it can take this problem in a serious way,” says Kat Barr, chief of staff for UltraViolet. “This isn’t an NFL problem, it’s an American problem. And the NFL can help make it right by appointing a commissioner who takes violence against women seriously.”

But until then, the NFL — and the brands that partner with it — better hurry up and answer the question posed by ESPN’s Hannah Storm. In a video clip, which outraged women have also been posting on social media, Skoloda says Storm pretty much sums up women’s angst over the issue: “What, exactly, does the NFL stand for?”