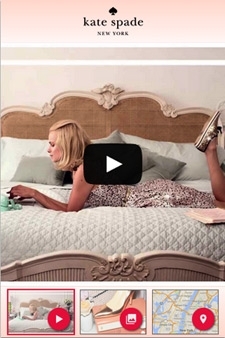 Google will release Monday a series of ads and tools to support brands looking to connect with consumers who are hopping from one mobile device to another,  preparing the industry for advancements in digital advertising that many expect to see as wearable devices become more fashionable and practical.

The mobile display ad formats and tools, scheduled to launch in the next few months, will work across Google's Display Network (GDN), AdMob, and DoubleClick, giving brand marketers and agencies the ability to build ads that work across screens. They will range from 360-degree videos to still images that float on the bottom of the screen.

The biggest advantage is in creating an ad once and allowing technology to repurpose it for different screen sizes. The mobile lightbox Engagement Ads allows brand marketers and agencies to build the ads for mobile, and the technology resizes them for every screen. It also allows marketers to use existing brand assets to create rich media ads in HTML5 that run across devices and screens.

The ads dynamically resize to fit any ad unit size and the brand is only charged for the impressions when users click, explains Jonathan Alferness, director of product management for Mobile Display Ads at Google.

Google's worldwide net mobile ad revenue nearly doubled in 2013 compared with the prior year, eMarketer estimates. Worldwide mobile advertising revenue hit $17.71 billion in 2013, and eMarketer expects it to reach $32.71 billion this year. Google owned 14.5% of the U.S. mobile display ad market in 2013, compared with 35.3% for Facebook, per the research firm.

Video TrueView ads are making their debut in more apps across AdMob, although they have been running across gaming apps in the AdMob network. Brands only pay for TrueView ads when a user chooses not to skip the message.

Google's anchor mobile ad format places an advertisement at the bottom of the screen on a device, so when a consumer scrolls down the page the ad remains in place at the bottom of the screen. The consumer can click to close the ad at any time. Finally, a mobile ad format designed like a magazine-style text ad arrives as an interstitial for the in-app format on the AdMob network. GDN text ads automatically become eligible to serve in this new ad space.

Google also will introduce tools that convert existing ads on desktops into versions that will work across screens and devices. The tool will automatically resize the image to accommodate different size screens for ads running on the GDN.

Google's Flash-to-HTML5 conversion tool likely will become one of the most used. Google has been working on a beta version it calls Swiffy. Google Display Network and DoubleClick Campaign Manager will automatically create an HTML5 version of Flash ads. When they get served on a device or browser that doesn't support Flash, the system can show the interactive HTML5 ad instead of a static image backup.