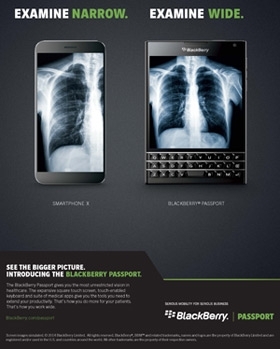 Mobile company BlackBerry has kicked off a global brand re-launch with a campaign developed and implemented by ad shop gyro. The agency was selected to do the work after a formal pitch.

The campaign repositions BlackBerry as the firm that offers “Serious Mobility for Serious Business,” and coincides with the debut of the company’s new Passport device.

The effort is part of a major makeover for the 15-year-old mobile phone and network company, which was hit hard by the double whammy of the debut of the Apple iPhone seven years ago, and the big recession.

By 2012 there was talk that the company would go under, or at least file for Chapter 11 and reorganize as it sought to sell itself. Late last year, however, after failing to find an outright buyer, the company secured a $1 billion finance package from a group of investors led by Canada’s Fairfax Financial Holdings.

As part of the deal, turnaround specialist John Chen came in as interim CEO. Previously he led the turnaround of Sybase Inc., shifting its focus to become a thriving mobile commerce solutions provider.

So far, Chen is credited with making progress at BlackBerry — refocusing on government contracts and big business — although the company’s revenue and profits are still falling.

Gyro has created all of the worldwide core sales and marketing assets, campaign guidelines and messaging for the integrated global “Serious Mobility for Serious Business” effort.

“BlackBerry is the most relevant brand when it comes to mobility in serious business,” said Christoph Becker, CEO and chief creative officer, gyro. “There is nothing better than being seriously productive in your job” -- a task that BlackBerry has made its mission to help customers achieve. “It’s in their DNA,” Becker added. “BlackBerry understands serious business…Being able to bring back a beloved icon like BlackBerry is the best job ever for an ad agency.”

The company is not disclosing the spending earmarked for the new campaign. Earlier this month, when it reported quarterly results, it said that sales and marketing costs for the period were down by about half to approximately $200 million.

According to Kantar, BlackBerry spent about $95 million in the U.S. on ads in 2013, $67 million of which was spent in the first half, before it turned away from the consumer market to focus primarily on business. In the first half of this year, U.S. measured media spending totaled $2 million. Global ad spending figures were not available.