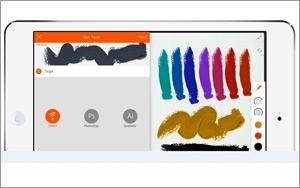 At its annual Max conference in Los Angeles, Adobe Systems underscored its shift beyond the PC by unveiling a series of new and updated mobile apps tied to its Creative Cloud platform on Monday. It also introduced a new service for synchronizing work — files, photos, graphics — across a range of devices, and a new Creative SDK (software development kit).

The new lineup of apps includes those within the Photoshop, Lightroom and Illustrator product lines along with three new ones that work across other Creative Cloud apps to “capture” images, colors and designs from the physical world.

The new Photoshop Sketch app, for example, adds new built-in brushes for working directly in mobile devices and allows for sending content back and forth between Photoshop and Illustrator. Photoshop Mix has been updated to work on the iPhone as well as the iPad, while Illustrator folds in two existing apps, Draw (previously called Ideas) and Line. The former is for vector art, while Line is a precision drawing app.

The new Capture category of apps including Brush, which allows users to turn photos into paintbrushes on an iPad or iPhone to draw art in apps such as Illustrator or Photoshop. The companion Shape app similarly turns photos of objects into shapes, while the Color app provides a way to capture colors and use them in other Creative Cloud apps.

And with Premiere Clip, Adobe expands into mobile video editing, providing a tool for combing clips shot with an iPad or iPhone into a single video for easy sharing.

Separately, the software giant rolled out a new service called Creative Profile that allows designers and artists to access files and assets like brushes, shapes, and fonts regardless of what device or Adobe app they’re using. “This new Creative Profile moves with creatives from app-to-app and device-to-device, so assets automatically appear when they need them, in the right context,” stated the company.

Adobe also launched the public beta of a Creative SDK for creating new third-party mobile apps that connect to Creative Cloud. Initial partners including custom photo service Snapwire, which is using Lightroom editing technology, and Storehouse, a publishing app which can integrate with users’ Lightroom photo catalogs, according to CNet.

Among other new offerings, Adobe launched a new serviced dubbed Creative Talent Search, that costs $1,500 a month, and allows recruiters to find experts with Adobe tools based on different criteria. That might include finding a Photoshop specialist who lives in Boston and has experience in automotive design, for example.