Is Mobile The Next Launch Pad For Entertainment IP? 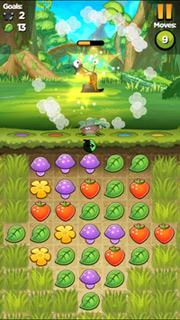 Well, if you are Rovio, the answer to my headline question is a mixed “yes.” The spherical heroes of Angry Birds pretty much showed that mobile games can be so absorbing, widespread and endearing to port into everything from TV programs to stuffed dolls. I am not entirely sure that the Angry Birds world and characters fully support these extensions, but it has spawned more than a few attempts like Disney’s Cut the Rope to go mobile-first with intellectual IP plays.

It is not surprising that two Rovio refugees, Andrew Stalbow and Petri Järvilehto, have endeavored to launch a franchise via mobile gaming that from inception is designed to migrate beyond the phone. “Best Fiends” from their startup Seriously is an exceptionally well-polished puzzler that blends a rich world and backstory with Pokemon-like RPG characters who transform and develop over time. Whether the core IP has the depth and narrative appeal to work outside the touchscreen is anyone’s guess. The tile match gameplay itself is engaging and tied deftly to an ongoing narrative. The production values -- including a full 64-piece orchestral score played by the Budapest Art Orchestra, and all-important character rendering -- are superb. The in-game animations are absorbing. At one point in the quest-based structure, the player-characters go through major transformations that themselves are visual events. The “fiend” characters have that edgy quality that saves them from saccharine cuddly.

Stalbow, who ran Twentieth Century Fox’s mobile business at one point, tells me he realized mobile’s potential as an IP launch pad when he was partnering with Rovio to promote the animated film Rio through a special edition of Angry Birds with the movie’s bird characters. “We took exit polls at the movie and asked people how they heard about it. The overwhelming feedback from the key demos was that the number one marketing was Angry Birds. Mobile had crossed over from communications device to entertainment device.” He believes the migration of audiences to mobile as a primary entertainment device has happened far faster than the entertainment industry expected or was ready to track.

But more than the massive time spent on mobile, he believes that the kind of engagement that these devices offer makes them a uniquely strong platform for entertainment brand-building. “It is a lean-forward experience.” But more than that, he argues,
“people are really using the brand.” Entertainment traditionally has been built on sight and sound. “For the first time ever brands are being built on the power of touch. I think it is an incredible sense on which to build a brand.”

Well, maybe. Touch may be part of the hook that absorbs people to invest something more of themselves in a narrative and characters, but he admits that the fundamentals of IP remain premise, story and characters. They have created a world called Minutia that fits in name and kind to the mobile platform on which it first lives. The heroic fiends level up to new powers and forms to help them defeat the Slugs of Mount Boom. And yes, this first title is just the opener for a planned trilogy. The game cleverly grabs some of the Pokemon vibe too, by evolving characters in shape and function with the kind of captivating creativity Nintendo pioneered.

In fact, the transformations of the characters are being used in YouTube and other distributions to promote the game. One of the interesting things about this project is that the high in-game production values are built to travel. The music score will be present on Beats and iTunes. Characters will become stickers in messaging apps and YouTube clips. “The top marketing asset is the game itself,” Stalbow says.

How this translates into marketing opportunities long range is still in progress. But an initial partnership with the charity/cause Malaria No More shows how character can be tied to product. One of the fiends is a mosquito named Edward who denounces his ancestors’ bloodsucking ways to drink only Cocoanut water from a scuba-like tank on his back. When on your team Edward encourages players to learn more about malaria eradication and visit the charity’s site.

I have to say, as much as I like this game and applaud the creative thinking at every point in it, I think mobile-first IP is going to be challenging. Seriously likes to say they are turning the Hollywood model on its head by starting with a medium that usually is one of the last of the licenses parsed from a property that started on TV or in theaters. But there is good reason for that; depth of character and story. Establishing those qualities within the context of what is at heart a puzzle based experience will be tough. Game back stories are traditionally in deep background in the player’s mind and often irrelevant to the joy of the play. Character is built via situations, not just attributes. Whether any of this is engaging enough to fuel other properties and audience curiosity outside of the game remains to be seen.

Ironically, however, it is the determination to make a franchise out of this that actually helps make Best Fiends a better game. The score, character design, visual environment, fluidity of motion pulling you through the levels, all just make this a game world that will tug you back. Which suggests that we might get a better grade of mobile gaming if developers thought harder about building worlds that are worth spending our time in.