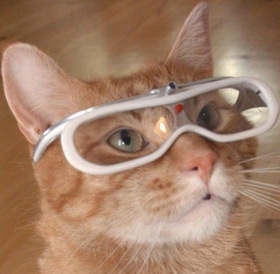 9Lives is launching a campaign that reinvents the iconic Morris the Cat.

From Batman to Bond, consumers seem to respond to the cinematic "reboot" — the practice of taking well-known characters and re-imagining them with modern storytelling and a culturally relevant tone.

For the “Morris: Cat Thought Leader” campaign, the brand is taking Morris — the iconic orange tabby cat who starred in 50+ TV commercials in the '70s and '80s — and reintroducing him as a pop culture pundit, tech commentator, and "charmingly choosy" foil to famous Internet felines like Grumpy Cat and Lil' Bub.

The digital, social, and PR campaign includes “Cat’s Eye View,” which lets visitors navigate Morris the Cat's journey at
http://9lives.com/catseyeview as they see the world from his perspective. Paid online display and a PR campaign will support the effort, which is EVB’s first work for 9Lives.

Additionally, across multiple social media channels that have been scripted to read like an episodic TV show, Morris discusses breaking news, comments on trending topics, and dispenses cat wisdom on important subjects like eating, napping, sunbathing, and cuddling.  They include Twitter, Instagram and a dedicated website.

The goal is to engage with current consumers in a new and compelling way, while also speaking to the younger, tech-savvy crowd, says Carrie Schliemann, director of cat food and snacks at Big Heart Pet Brands (9Lives' parent company).

As a self proclaimed “early adopter of early adopting”, Morris schools his owner on the finer points of wearables while she straps smart-cam goggles and a Wi-Fi-enabled activity-monitor collar on her persnickety pet in the introductory video.

The sassy feline roams around his home making his trademark witty comments as his cat-cam goggles captures him engaging in typical feline behavior (napping, laser chasing, cramming his physique into a too-small box, and, of course, eating).

“We wanted to bring Morris back in a way that inserted him into a relevant, “highly opinionated” conversation in culture,” says Patrick Maravilla, VP and group creative director, EVB.

Wearable Technology was the right fit because people either love it or hate it, he says.

Morris, who has been 9Lives’ mascot for nearly 50 years, is no stranger to social media and technology. The star of 50 ads (and two feature films) has a Facebook page with 250,000 “likes,” and he has used it to publicize his 2012 presidential bid (his second) and ongoing pet-adoption program, Morris' Million Cat Rescue, which was designed by Smith Brothers Agency.