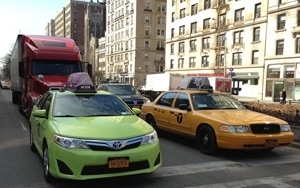 ABC says it has strong viewer results and advertising engagement when it comes to an unusual TV effort to program New York City taxis.

More than half of the viewers -- or 56%, who ride in New York City taxis that have ABC programming, via Creative Mobile Technologies systems -- recall at least one TV commercial on an unaided basis.

Other results: 82% said they are likely to seek information about the products and services they saw advertised. “That 82% is such a high engagement number -- much more than some other media,” says Debra O'Connell, president of ABC National TV Sales.

In addition, 69% of the respondents are likely to try the products or services advertised. Sixty-four percent of the taxi TV audience is adults 25-54; 90% watched the TV programming.

ABC taxi effort is 60% programming/40% advertising -- typically consisting of minute and a half of video content from “Jimmy Kimmel Live” or other Disney-ABC Television content, such as “Live with Kelly & Michael” or “Jeopardy” -- which is followed by advertising in pods of around 45 seconds.

Data for ABC’s results comes from Edison Media Research, which talks to riders leaving taxis after completing their trips. A researcher would question riders while walking to their destinations.

Tom Haymond, executive vice president of Creative Mobile Media, which is a subsidiary of Creative Mobile Technologies, says that  since making a deal with ABC, ad engagement has greatly improved compared to previous content in taxis.

One indication of engagement, he says, can be found in looking at taxi riders who have the ability to turn off the content on taxis. Before ABC’s content was running with Creative Mobile, Haymond says 18% of the time people turned off the content; with ABC, it is just 10%.

OConnell says advertisers only pay for those impressions being viewed. In a given week, Haymond says ABC can amass more than 2 million impressions in New York City cabs.

Creative Mobile Technologies controls about 50% of New York City taxis -- with some 7,900 yellow medallion taxis. In addition, it has 15,000 interactive media screens around the country. Overall, it provides more than 30,000 taxicabs in over 70 cities and 35 states.
advertising, engagement, out-of-home, transportation
Next story loading