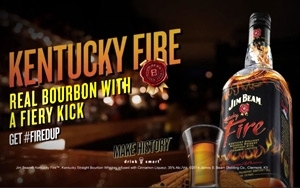 The videos, which launched Oct. 6, are available on Jim Beam's Facebook, Twitter, and YouTube, and will run on various online, mobile, social and experiential channels such as ESPN, AOL, Kargo, Viacom, and NBCUniversal. The digital ads will run through early November.

“With our series of online videos, we showcase the best way to enjoy Jim Beam Kentucky Fire -- as a shot -- in a tongue-in-cheek manner to appeal to millennial guys,” says Dan Cohen, spokesperson for Beam Suntory bourbon brands. “We’re using #FiredUp as a way for consumers to turn the heat up on their night -- figuratively and literally -- given the cinnamon flavor of the shot.”

The Kentucky Fire videos give consumers interesting and comical ways to get #FiredUp when they’re out, he says.

“We’d love to begin seeing consumers mimic the shots in the videos and share them back with us in social while using #FiredUp,” Cohen says. “Because Kentucky Fire is a new product, we’re giving our target consumer a fun way to engage with us and our new product.”