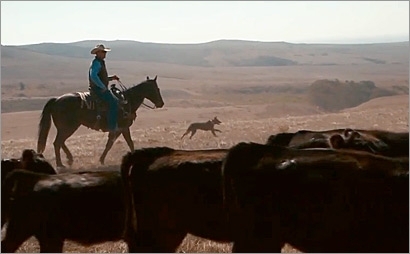 For years, Whole Foods Market didn’t think it needed advertising to rule as one of America’s best-known brands. But back in August, it announced a change of heart, and the Austin, Tex.-based retailer is ready to roll. Its “Values Matter” campaign is breaking on network TV, as well as in print and on digital channels.

The campaign, developed by Partners & Spade in New York, trumpets the chain’s commitment to quality food sourcing, with sweeping panoramas of its suppliers at work in fields, with livestock, and on the high seas. “We are hungrier for better than we ever realized,” the spots begin. (Gerard de Thame shot the documentary-style ads.)

The new ads closely follow its announcement of its Responsibly Grown rating systems. “Whole Foods Market has been subtly telling our story for decades,” says Jeannine D’Addario, the company’s new VP/ communications, in a release announcing the new campaign. “Now is the time to overtly communicate what we’ve spent more than 35 years creating as change agents in the food world.”

Industry observers agree that yes, now is the time for Whole Foods to address it growing challenges. The company, which is scheduled to announce quarterly earnings early next month, recently lowered its sales forecasts for the year.

Analyst Chuck Grom, who follows Whole Foods for SterneAgee, writes that both the Responsibly Grown program and the ad campaign supporting it are a good fit, “as the company looks to reinforce its core disciplines and leadership around product quality and transparency in the marketplace, as well as highlight its value offering.”

While Grom remains neutral on the company, he adds that the standards will be another way the company can assert its dominance in the healthy-foods market place. “Overall, this system should help drive better transparency/industry standards; distinguish Whole Foods Market and its product offerings, and allow consumers to make more informed choices.”

Spots are running in such nighttime programing as “The Voice,” “Scandal,” and “Modern Family,” as well as “The Tonight Show Starring Jimmy Fallon,” “Jimmy Kimmel Live,” and NFL and MLB games. (GSD&M is the media agency.)

In its most recent rankings, Interbrand ranks Whole Foods as the 23rd most valuable retail brand.