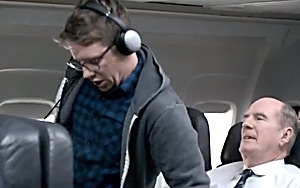 For all the talk of wireless connectivity these days, headphones still remain stubbornly connected to the devices they serve by cords.

“One of the things we like [about Vine] is it tells a quick story in six seconds,” Dave Spinato, global director of digital and social at JBL parent Harman, tells Marketing Daily. “We wanted to engage consumers, and have them submit their ideas for Logan to re-enact.”

The Vine effort follows a strategy laid out in an upcoming television campaign that depicts hapless accidents people have while connected to devices by their headphones. Scenes depicted include a man yanking a laptop off a desk when he goes to get something and a woman falling backwards on a treadmill as she turns away from her music player. A second spot uses the theme from “Rocky,” starting over and over again as a man struggles to adjust his corded headphones. The spots are currently running on YouTube and will run on television in November.

“The idea was inspired by the TV campaign,” Spinato says. “When we saw the story boards, we though it was wildly creative, and we ran with it pretty quickly.”

From the outline of those commercials, JBL’s social marketing team looked to find a way to get consumers more involved, eventually landing on the #CordFail effort. Using Vine was a natural way to tell consumers’ stories quickly, and Paul’s 5.4 million followers would bring scale, Spinato says.

“With his fans and his overall creativity, we thought it was a great fit,” he says. Using Vine also gives the brand a chance to take a “deeper dive” into Twitter (which owns Vine) as a marketing platform, he adds.

Paul’s first video for the campaign depicts him dropping his phone outside of an elevator, which closes on his headphone cord before he can retrieve it. When the elevator moves, Paul is lifted off the ground as a woman wearing JBL’s Bluetooth-enabled headphones looks on.

JBL will collect the ideas and forward the best on to Paul, who will create content based on them. He will tag and mention the originators of the idea who will be entered into a contest to win an “Epic Experience” at either the NBA All-Star Game, Coachella or the 2015 Grammy Awards. Another 100 people who submit #CordFail stories will win JBL headphones.