Optimism Index Climbs To Highest Level Yet: All Media Except Print And Portals On The Rise

In another encouraging sign for the advertising economy, the optimism of ad executives -- both marketers and agency counterparts -- is at its highest level since an industry researcher began tracking it seven years ago. The data, which comes from the Perception Group’s Advertiser Optimism Index, is based on the self-reported perceptions that ad execs have for increasing or decreasing their ad budgets in the next 12 months.

It comes as some ad industry forecasters, particularly Interpublic’s Mediabrands’ Magna unit, predict 2015 will see one of the best rates of ad budget expansion in years, due largely to economists’ predictions that consumer spending -- an important bellwether of advertising growth -- will once again surge next year.

The data should come as relief for big agencies and big media, which have experienced an erratic year of advertising demand so far this year. But not all major media should be optimistic -- particularly print media, which the majority of ad executives continue to be pessimistic about.

“On an overall basis, the index is at its highest level since we began tracking it seven years ago,” says Perceptions Group co-founder Ken Pearl, adding, "except for magazines and newspapers.”

However, the index for magazines and newspapers is a negative 4 and 17, respectively.

The greatest optimism continues to be for digital media, especially mobile. The mobile media index stands at a positive 43, while “digital” (a catch-all for online, social and mobile media) is a 41.

With a positive index of 21, cable TV is the next most optimistic ad medium, followed by broadcast TV (6) and radio (3).

Among the non-mobile digital media, social has the strongest optimism (an index of 39), followed by search (36), video (27), programmatic (25), video ad networks (18), non-video ad networks (5) and website publishers (1). The only digital medium to have a net negative index is “portals,” which stand at a minus 6 index. 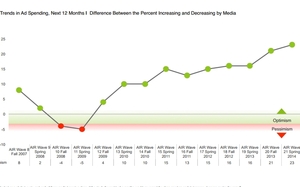 advertising, media measurement, metrics, mobile, programmatic
2 comments about "Optimism Index Climbs To Highest Level Yet: All Media Except Print And Portals On The Rise".
Check to receive email when comments are posted.
Read more comments >
Next story loading