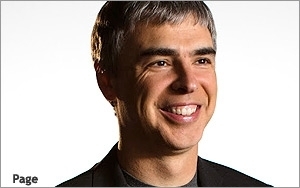 Fortune named Google cofounder and CEO Larry Page 2014 Businessperson of the Year, citing his ambitions to change the world and the company's "eye-poppingly strong financial results."

Fortune's Miguel Helft, who interviewed Page, wrote that Google's CEO and co-founder is the type of guy who thinks the improbable, a given; and the seemingly impossible, likely. With 20% annual growth for the past three years, Google's revenue topped $16 billion in the most recent quarter. Google's cash stash, about $37 billion when Page became CEO, continues to grow, too.

During the interview, Helft discusses with Page his relationship with Steve Jobs, vision for Google, management strategy and more. Page describes a debate with Jobs where the Apple founder said Google works on too many projects, whereas Apple does a good job of doing one or two things really well. While it worked for Apple, Page says his vision for Google is to have a much bigger impact on the world by doing more things.

Google has made major investments in artificial intelligence, health, robotics, and delivery drones in the past year. It expanded its venture capital arm, which has invested in hundreds of startups, and bought Nest for $3.2 billion to pursue working to create the devices for fully automated home. It has put hundreds of millions behind Calico, an independent biotech firm hatched by Google and run by former Genentech CEO Art Levinson.

Despite all the investments, a handful of Wall Street analysts, investors and industry experts disagree with the extent of the diversity. Some believe Google spreads itself too thin. They are mostly concerned with the slowing growth of search, Google's cash cow.

Macquarie Securities Analyst Ben Schachter in a research note describes Google's last quarter's earnings as somewhat messy, although nothing dramatically negative. "We remain long-term bulls, but we are concerned about 4Q comps, limited visibility into core revenue and expense drivers, and the fact that many significant investments are geared toward mid-long-term initiatives that will take time to generate revenue," he wrote, though continues to recommend the stock for long-term shareholders.