LinkedIn, not Facebook, is the social network among advertisers, according to results of a survey conducted by the Association of National Advertisers of their members’ personal social media habits.

While Facebook and LinkedIn tied in terms of the share (92%) of ANA members using them personally, they were far more connected with others via LinkedIn (an average of 507 connections) vs. Facebook (an average of 385 friends).

Compared to average Americans, the ad executives are much more voracious users of all forms of social media, especially for business-oriented network LinkedIn. More than four times as may ANA members (92%) use LinkedIn as compared with the average adult Internet users (22%), according to estimates from the Pew Research Center. 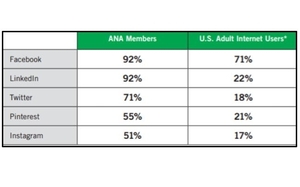 While much of their social media behavior is personal, a significant amount of it is also part of their professional endeavors -- either personally or for their organizations and brands.

Twenty-one percent of the respondents said they actively blog for either personal or professional reasons. And 51% said they post content regularly about their company or their brands.
advertising, facebook, linkedin, media measurement, social media, social networks
1 comment about "ANA: LinkedIn Is 'The' Social Net, Finds Ad Execs Extremely Active On All Platforms".
Check to receive email when comments are posted.
Next story loading