Everyone, Even Google, Has a Viewability Problem 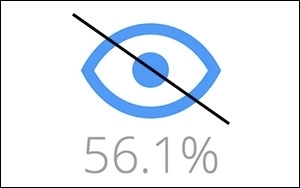 Google released a new study this week that found that 56.1% of all impressions served on its display platforms -- including Google and DoubleClick -- are not viewable.

It needs to be clarified that the numbers are not just from Google’s own network. The report includes data from all DoubleClick users, who may simply be using Google as an ad tech provider (i.e. not buying Google’s inventory). “This is based on a very significant sample size, not just on our own network,” a Google representative said.

Google, for what it’s worth, has not been dormant on the issue. It has offered viewability-based buying on its display network since last year while advocating for viewability to become a common currency. Additionally, it introduced its own viewability reporting to DoubleClick this summer.

Even still, not everyone was happy to see the figures in Google’s latest report.

“You’re [Google], the biggest ad tech player in the world,” an ad tech industry exec proclaimed. “You should be better than the market. People expect more.”

Finger-pointing aside, the purpose of the report was to set a benchmark, per Google. One of the more intriguing benchmarks set came from Google’s study of above- and below-the-fold inventory.

Google also notes that “a small number of publishers are serving most of the non-viewable impressions.” This is supported by the fact that the publisher viewability average is 50.2%, while only 43.9% of all impressions were viewable.

Even though the industry already knew digital advertising had a huge viewability problem, Google's report is a bit of a downer for any that were hoping to see improvements on the viewability front. “This report flat out says 56% of inventory is wasteful,” an industry expert said. “Any advertiser should stop [and ask question].”

google, media measurement, real-time, viewability
3 comments about "Everyone, Even Google, Has a Viewability Problem".
Check to receive email when comments are posted.
Read more comments >
Next story loading