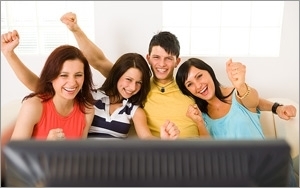 Traditional TV viewership has been declining -- most dramatically among younger viewers, specifically those 18-24.

Magna Global says this narrow target of young viewers dropped 14% this season through October versus last season for live, DVR and VOD usage from a year ago. These viewers are just watching 4.7 hours of prime time per week.

But TV supporters should note that traditional television viewing still makes up 68% of all video time for adults 18-24 — at 19.4 hours per week.

Young 18-24 viewers are increasingly moving to new digital media areas. Around 15% of 18-24 homeowners are broadband-only homes. This compares to 4% broadband-only residences for all U.S. homes.

Magna Global estimates that TV viewing through a video-game console has grown 9% this year among 18-24 viewers, with viewing on a mobile devices up 36%. Adults 18-24 spend over 9.5 hours per week consuming video on non-traditional platforms: PC, mobile and OTT.

Other older viewing groups have also witnessed declines in traditional TV usage, although not as steep.