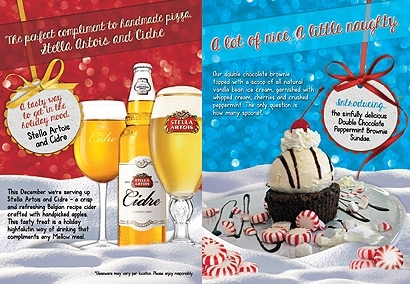 Everyone knows about selfies, but Mellow Mushroom, a pizza chain with more than 150 locations, is encouraging "usies" - photos with others - in its newest promotion.

"The inspiration that led to this campaign is that while the 'selfie' is still prevalent, people like to take pictures with friends and family and capture their experiences, including food," says Annica Kreider, Vice President of Brand Development, Mellow Mushroom. "Using these insights, the campaign practically created itself."

The campaign - running through December 31 - is supported in restaurants with tabletop creative, and social sharing via the #MellowStellaContest hashtag. One grand prize winner receives a destination vacation of his or her choice worth $2,000.

Mellow Mushroom typically engages in multi-partner promotions. For this campaign, HelloWorld is the administrator of the contest, including the official rules, winner validation and selection, and prize fulfillment. Meanwhile, Mellow Mushroom serves as the key sponsor and collaborator, as well as the one who brought Stella Artois on board. The pizza chain has recently introduced Stella Artois' Cidre, a European style cider, at its locations for the holidays and Mellow Mushroom felt that a campaign supporting this limited-edition beverage would be beneficial to both companies.

Last year, in partnership with Coca-Cola, Mellow Mushroom worked with HelloWorld on the Share Happiness campaign featuring a tabletop mobile game that inspired tablemates to get to know each other and offered the chance to win a trip. "In addition to the Share Happiness program, we did a campaign on Vine with Anheuser Busch and the Goose Island brand last year," says Kreider. "Mellow Mushroom has seen strong traction in mobile over the last two years. Most of the campaigns we've created have a mobile or social element to entertain guests and provide a fun experience."

Mellow Mushroom has worked with HelloWorld since 2011.