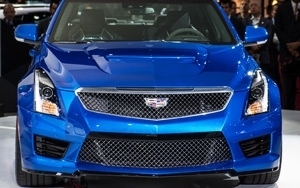 Cadillac has made news in and outside the industry for its plan to move to New York's super-hip meatpacking district next year, near Google and the High Line.

So it is no surprise that Uwe Ellinghaus, Cadillac's CMO, packed the house at the monthly International Motor Press Association meeting last week. Fielding questions about the products, the brand, and the strategy behind the GM luxury brand's move to the Big Apple, Ellinghaus said the move is about culture and enlightenment.

"If you want to turn Cadillac into a global brand, you have to be in New York," he said. "It is the most cosmopolitan city in the U.S., if not the world -- and it is the natural home for luxury, and not just in automotive. The city is hectic and stressful, but there is this great spirit that people have for change."

He cited the city's retail environment as a potential source of inspiration and ideas not only for ideas around the Cadillac brand, but also with direct application to dealerships. "You can't deny the experience in New York of luxury outside automotive category, and how appealing it is. We also want a retail experience that is not just a room full of cars. Not just bricks and mortar. We need to think more about the integration of Cadillac at all customer touchpoints: communications, dealership experience, pricing."

Cadillac also needs to be here because it needs to grow here, he said. "We are just not as strong in the two biggest luxury markets [New York and California] as we would like to be. To reach customers who live in these areas we wanted to be closer." And he said it helps to be near Caddie's marketing partners and New York agency Lowe and Partners, which replaced Rogue last year. "It shows how serious we are about elevating and expanding Cadillac. The spirit of New York is that it is a city that reinvents itself almost every day, and that's what we want to do at Cadillac."

He also fielded a question on Cadillac's decision to change the nomenclature of its cars to alpha numeric designation, characterized by the upcoming CT6 luxury car (which will have the first streaming-video rear view mirrors). He said it helps in two ways: it puts the focus on Cadillac as the brand -- not on the cars as brands -- and clarifies to consumers each car's position in the family. "I don't need cool names, I need one cool brand," he said. "There is no way around alpha numerics if you want to give things their proper space." He said that the change is necessary because the Germans set that standard, and consumers now understand the luxury auto category in just those terms.

Since he's German, he was able to shoot barbs in that direction. "I really think our prospects come to our showrooms whether we like it or not say, and say 'what is your A4? What is your 5-Series?' Yes, it is boring and dull, and in this regard it's German, but it is logical. The laws of the segment were invented by Germans."

There's a steep hill to climb as the Germans also dominate the market, with 85% of sales. Ellinghaus argued that this is not such a bad thing for Cadillac, and that this near-ubiquity of German brands in the luxury segment could be a boon. "When the entire neighborhood is driving a BMW, people are saying, 'I don't want the same car everyone already has.' So I'm delighted Germans have one sale record after next because branding is about differentiation, and the ubiquity of the Germans will help us."