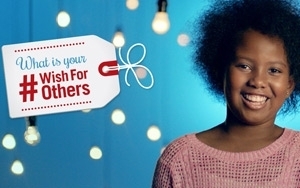 Capital One is making wishes come true this holiday season with its #WishForOthers campaign.

Last week, Capital One granted a Massachusetts teacher’s wish for her students, giving each child not only an armful of books to take home, but many other items they need, from warm winter coats to technology resources in their classroom.

The third-grade teacher, Nicole Bollerman, made a wish for her students that was granted. It was captured in an emotional, documentary-style video.

The video tells the story of Bollerman’s wish, which was that she could give each of her third graders a book of their very own to take home for the holiday break. A book that they could write their name in, to care for, to read over and over again.

Capital One asked consumers to share their wishes for other people. For the past month, people have been sharing their wishes for someone else -- a family member, a friend, a neighbor, or a community -- with Capital One by using #WishForOthers on Twitter, Instagram, or the Capital One Facebook page for a chance to make it come true.

This is the first year of the program. Capital One has received countless wishes. The company looked for wishes that would brighten the holidays for others. Other criteria included creativity, originality and feasibility.

"The campaign was all about brightening the holidays for others in unexpected and memorable ways,” Lisa Rountree, vice president, marketing, Capital One, tells Marketing Daily. “Wishes like Nicole Bollerman's thoughtful gesture for her students embodies the true spirit of the holidays and brings joy not only to the students in her class, but to anyone who hears the tale of her selfless #WishForOthers and how she made it come true.”

Other wishes that have been granted include a woman who thanked her heart donor’s family with a Christmas dinner, a woman and her husband delivering 75 gifts to elders at their local Senior Center and The Boys & Girls Club of Central Georgia sending 20 members to the National Conference in Orlando, Fla.